Please ensure Javascript is enabled for purposes of website accessibility
Log In Help Join The Motley Fool
Free Article Join Over 1 Million Premium Members And Get More In-Depth Stock Guidance and Research
By Brent Nyitray, CFA - Jun 29, 2021 at 7:31AM

June 23 was a big day in the mortgage market as the Supreme Court decided two issues that will weigh heavily on the future of Fannie Mae (FNMA -1.67%) and Freddie Mac (FMCC -2.71%). The Supreme Court ruled that the president has the authority to replace the director of the Federal Housing Finance Agency (FHFA), and it rejected a shareholder lawsuit by several hedge funds that claimed the FHFA exceeded its authority in handling the two government sponsored entities (GSE). This decision basically removed the last justification for owning the stocks.

Fannie Mae and Freddie Mac shareholders tried to argue that the structure of the Federal Housing Finance Agency was unconstitutional, and the government had no right to institute its net profit sweep, which diverted all of Fannie and Freddie's net income to the U.S. government.

However, Justice Samuel Alito wrote in the opinion: "When the FHFA acts as a conservator, it may aim to rehabilitate the regulated entity in a way that, while not in the best interests of the regulated entity, is beneficial to the Agency and, by extension, the public it serves. This feature of an FHFA conservatorship is fatal to the shareholders' statutory claim." This means the FHFA has no fiduciary duty to Fannie Mae and Freddie Mac shareholders, and that its main concern is the broader public.

Fannie Mae and Freddie Mac both fell around 45% on the news of the decision. 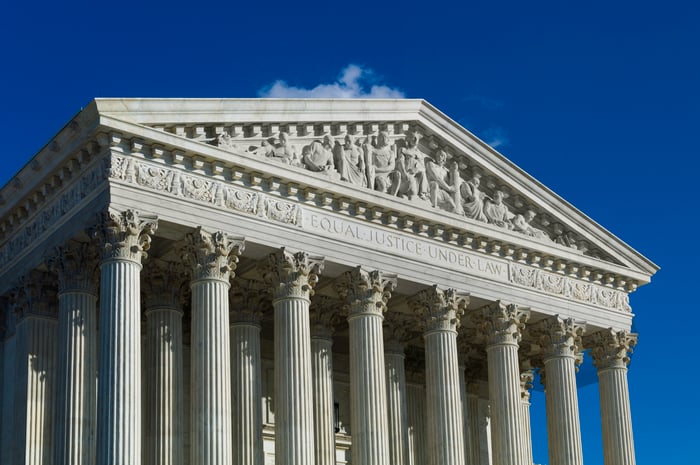 The stocks shouldn't exist in the first place

When Fannie Mae and Freddie Mac failed during the financial crisis and subsequently entered into conservatorship, the government left just over 20% of both companies' stock outstanding, trading on the pink sheets. The government did this so it wouldn't be forced to consolidate the GSEs' debt onto its own balance sheet, which would have had a material impact on the United States' debt-to-GDP ratio.

With the removal of Mark Calabria as the head of the FHFA, the philosophy regarding the companies will shift as well. The Biden administration is much more interested in the GSEs helping support affordable housing goals and increasing access to credit. In the waning days of the Trump administration, Calabria put several restrictions on Fannie and Freddie that will probably get reversed. The net effect will be to increase the flow of credit and increase the GSEs' footprint in the mortgage market.

Investors hoping for a release of the GSEs from government control will probably have to wait for a new administration. Releasing Fannie and Freddie was always going to be a heavy lift, one that will involve complicated legislation and the reconciliation of stark ideological differences in Washington, D.C. Suffice it to say the appetite for releasing them simply isn't there.

Where does that leave Fannie Mae and Freddie Mac shareholders? Fannie and Freddie stock was always something of a litigation lottery ticket, and at this point, the numbers have been announced and the ticket is worthless. While Fannie Mae and Freddie Mac will undoubtedly earn a lot of money going forward, those earnings are for the benefit of the government and not stockholders. It is possible that current stockholders could participate if Fannie and Freddie are eventually released, the chance of that happening is impossible to evaluate, which makes the companies an unsuitable long-term investment. The stocks are dead money at this point.