Please ensure Javascript is enabled for purposes of website accessibility
Log In Help Join The Motley Fool
Free Article Join Over 1 Million Premium Members And Get More In-Depth Stock Guidance and Research
By Will Healy - Jun 29, 2021 at 6:11AM

Despite operating in the same business, Cinemark's (CNK -0.70%) stock has not gained nearly as much attention as AMC Entertainment Holdings (AMC -9.69%). Over the last month, AMC stock experienced an average share volume of about 278 million, compared to only 3.3 million for Cinemark.

Incredibly, this difference remains despite Cinemark attracting nearly as much short interest on a percentage basis as AMC. However, the reason why AMC has become the meme stock likely hinges on one critical intangible. 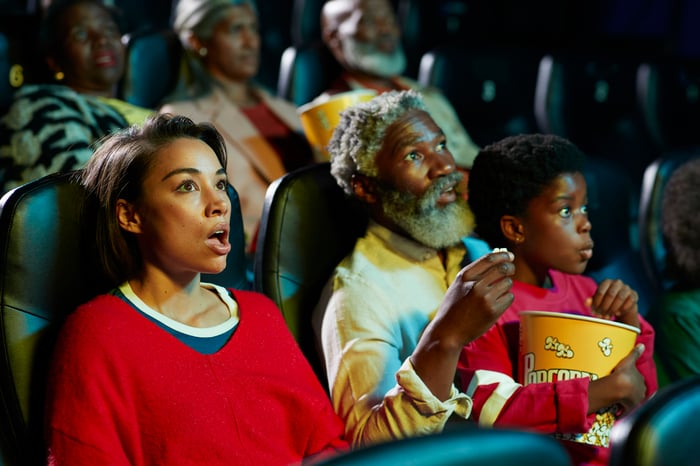 With second-place Regal Entertainment not trading on U.S. exchanges, the competitive battle of interest to stockholders is the competition between AMC, which operates 1,004 theaters worldwide, and Cinemark, a company running 523 theaters.

Still, other than the size differential, Cinemark and AMC operate similar businesses facing comparable problems. Both suffered greatly as COVID-19 forced theater closures across the world. Moreover, with Hollywood studios releasing few new films, moviegoers have not visited in large numbers. In the most recent quarter, Cinemark's attendance fell 81% compared with the first quarter of 2020 while 89% fewer people visited an AMC theater over the same period.

Nonetheless, the financial metric that has attracted most of the attention recently is short interest. Shares outstanding for AMC stand at 502 million today. Given the current short interest of 85 million, that means that short bets affect approximately 17% of its shares.

However, Cinemark's 120 million shares outstanding has drawn a short interest of about 19 million shares. This means around 16.2% of its shares are short, only a slightly lower percentage than that of AMC.

Yet despite that modest difference, AMC stock has risen by close to 2,500% year to date, exponentially higher than Cinemark stock's 32% gain over the same period. Consequently, this has taken AMC's valuation to about 23 times sales, well over Cinemark's P/S ratio of just over 10. 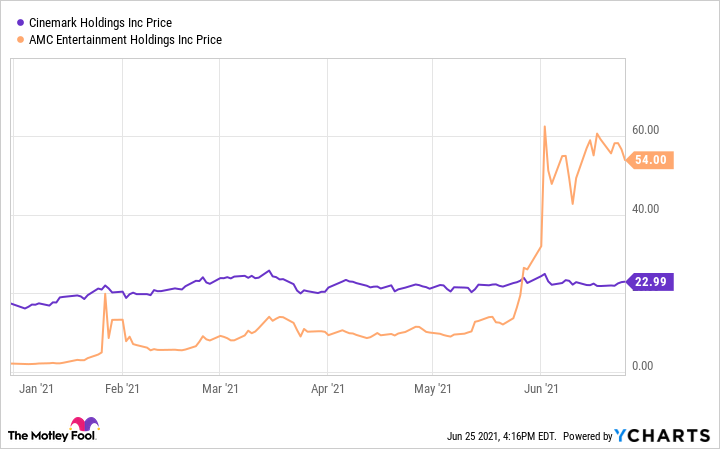 Why the variance in performances?

So what made retail investors bid up AMC stock but not Cinemark stock? It seems the determining factor comes down to online and social media attention. According to Google Trends, AMC has consistently attracted more interest since last fall.

However, after AMC became a hot topic on Reddit's WallStreetBets, that difference grew. While interest in AMC has fallen from early June, it still earns more than seven times as much attention as Cinemark. Also, over that time, the Cinemark search term grew fivefold in popularity on Google compared with this time last year.

WallStreetBets indicates a considerably larger differential. On that site in June, 14 threads discussing AMC received 10,000 or more upvotes. During that time, only two threads from that site discussing Cinemark received more than 100 upvotes during the same timeframe, meaning it draws little discussion in forums like Reddit compared to its larger counterpart.

Will Cinemark ever experience an AMC-like short squeeze?

Given its lack of attention, Cinemark investors should not expect a massive short squeeze. Indeed, considering the short interest percentage relative to outstanding shares, Cinemark stock looks like a short squeeze target comparable to AMC. However, without significantly more social media interest, the entertainment stock will likely not earn similar interest from buyers.