Investors are enthused about the prospects for the dog-product subscription service company that recently came public via a SPAC.

Shares of The Original BARK Company (BARK 5.88%), a dog-centric omni-channel retailer, popped 9.8% on Tuesday, likely at least in part driven by a Wall Street analyst initiating coverage with a "buy" rating.

The company offers products for dogs primarily through monthly subscription services and is probably best known for its BarkBox, a box of toys and treats.

Shares of BARK came public in early June via a reverse merger with a special acquisition company (SPAC). 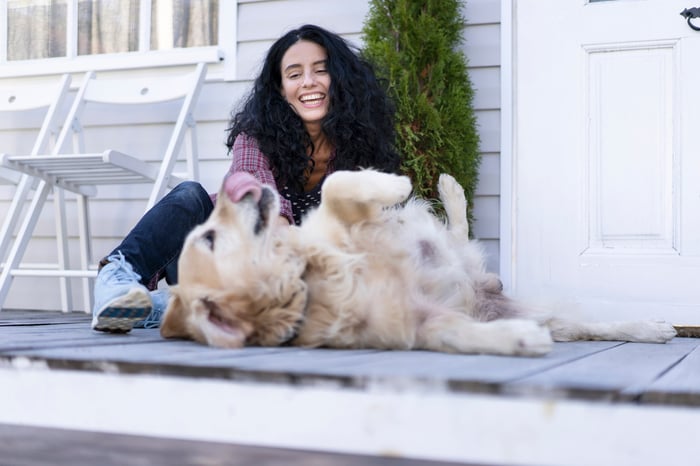 On Monday, a Citigroup analyst initiated covered of The Original BARK Company with a buy rating. That makes the stock three-for-three in racking up a bullish initial rating from Wall Street. On June 10 and 14, respectively, Jefferies and Canaccord Genuity began coverage of the stock with a buy rating.

The Citigroup move likely enabled more investors to discover that BARK was now publicly traded and was also probably the nudge some investors who had been watching the stock needed to take the plunge and buy shares.

Of course, any time a stock rises significantly this year, the question comes to mind: Could it be a highly shorted "meme stock" being driven higher by the Reddit crowd pouring money in?

That does not appear to be the case here. Only 4.5% of BARK's float (shares available for trading) and 3% of its total shares were sold short as of June 15, the latest available data.

The Original BARK Company is a stock worth putting on your watch list. The company has a well-known brand and a rather unique business model.

Moreover, it's a great time for a pet-related company to join the ranks of the publicly traded. Pet ownership has risen sharply during the COVID-19 pandemic since many people have been home much more than usual. Combine that with the pandemic-driven surge in online shopping -- BARK's products are available on Amazon.com, as well as its own website -- and you have a powerful combination.

Why Bark Plunged 19% in May

Beware of This Dog Because Bark Has No Bite

Bark Stock Is a Long Shot, But It Could Jump 10x

Why Bark Stock Soared on Tuesday