Please ensure Javascript is enabled for purposes of website accessibility
Log In Help Join The Motley Fool
Free Article Join Over 1 Million Premium Members And Get More In-Depth Stock Guidance and Research
By Brent Nyitray, CFA - Jun 30, 2021 at 8:45AM

As a general rule, stock price growth and dividend income tend to be hard to find in the same stock. High dividend stocks tend to be in mature businesses like public utilities, which grow more or less in line with the overall economy. Stocks that are in growth mode typically eschew dividends, preferring to use precious capital to grow the business.

Here is a real estate investment trust (REIT) stock with solid dividend yields that is also in growth mode. It might not have the high dividend yields one would find from a mortgage REIT like AGNC Investment, but it has much faster growth, and that makes i more likely to double its dividend over time.

A company with a great combination of growth and income 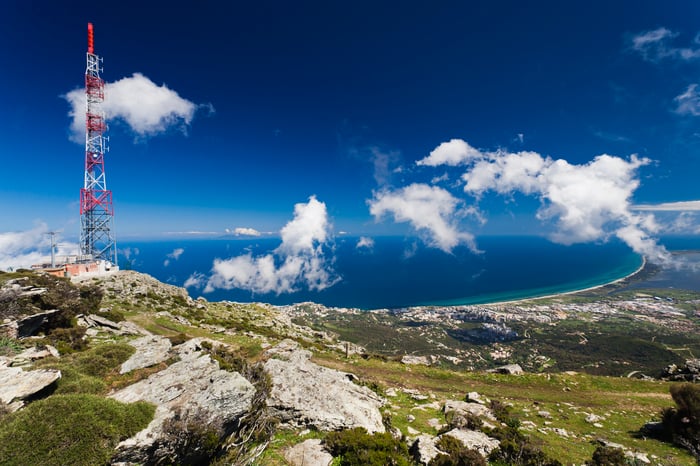 American Tower's tenants are the major mobile phone companies like AT&T, Verizon Communications, and T-Mobile US, along with cable TV operators and governments. It builds cellphone towers and leases the capacity. American Tower management said it sees mobile demand for data increasing 30% per year through 2026.

At the moment, the company's network of towers is seeing stress from increased use of data-hungry mobile applications like videoconferencing. The next wave of mobile data, which is 5G, is still in its infancy, and we haven't really seen all the applications for it yet.

Because of the tax structure that REITs operate under, American Tower will be forced to increase its dividend as the company grows earnings. This is because REITs must pay out the majority of their earnings as dividends in order to avoid paying corporate income taxes. American Tower earned $3.79 per share in 2020, and analysts expect the company to earn $5.16 per share in 2021 and $5.46 in 2022. Revenue is expected to increase from $8 billion in 2020 to $8.9 billion in 2021 and $9.5 billion in 2022.

A long history of increasing dividends

American Tower has been rewarding shareholders with dividend hikes for a long time. In fact, the company has increased its dividend every quarter since April of 2012. Last April's quarterly dividend payment was $1.24 per share. In April of 2012, the company paid $0.21 per share. That turns out to be a 22% cumulative average annual growth rate. If that rate continues, it will double its dividend in three to four years.

On its first-quarter earnings conference call, American Tower management guided for adjusted funds from operations (AFFO) to grow about 9% to about $9.25 per share. At current levels, that gives the stock a multiple of 29 times AFFO per share. This is pricey for most REITs, but American Tower more or less operates in a duopoly with huge barriers to entry.

In addition, it has a long-term growth story. Its current dividend yield is 1.9%, which is on the low side for a REIT, and it reflects the growth in the stock price over the past year or two. But with the dividend growing at a 22% annual clip, it could make a great income stock for an investor who also wants growth in earnings and stock price.