These companies have a lot of potential, but investors are having their doubts.

Stocks in the aviation and space industries have seen their prospects soar lately, with promising progress on amazing cutting-edge technology. Yet on Wednesday, shares of Virgin Galactic Holdings (SPCE -4.26%) and AeroVironment (AVAV 0.70%) ended up losing altitude. Below, we'll go through what happened with these two companies and what their long-term futures look like.

Shares of Virgin Galactic Holdings were down another 1% Wednesday afternoon after having been lower by as much as 8% earlier in the session. The space tourism company had seen its stock soar in the aftermath of its getting approval from the Federal Aviation Administration to take paying passengers into space, but since then, Virgin Galactic's share price has fallen close to 20% in just the past few days.

The stock analyst community has jumped in to say that Virgin Galactic's recent gains might have been more extreme than warranted by fundamentals. On Monday, analysts at Alembic Global argued that the big move higher last week fully priced in the benefits of the FAA decision and then some, and it cut its rating on Virgin Galactic's stock from overweight to neutral on valuation concerns. Paragon Intel weighed in with a report highlighting the massive cash outlays Virgin Galactic will need to make going forward.

On Wednesday, analysts at BofA made an even more extreme move, cutting their rating on Virgin Galactic all the way from buy to underperform. Analysts highlighted another potential threat, because as Virgin Galactic's rivals earn similar FAA authority, it'll likely dilute the first-mover value that has been a big boost to the share price.

Nevertheless, bullish investors seemed to step in during Wednesday's trading, in the hopes that Virgin Galactic's long-term promise will outweigh short-term fluctuations. With the company still months away from completing its test flight schedule, Virgin Galactic shareholders will have a long wait ahead of them. 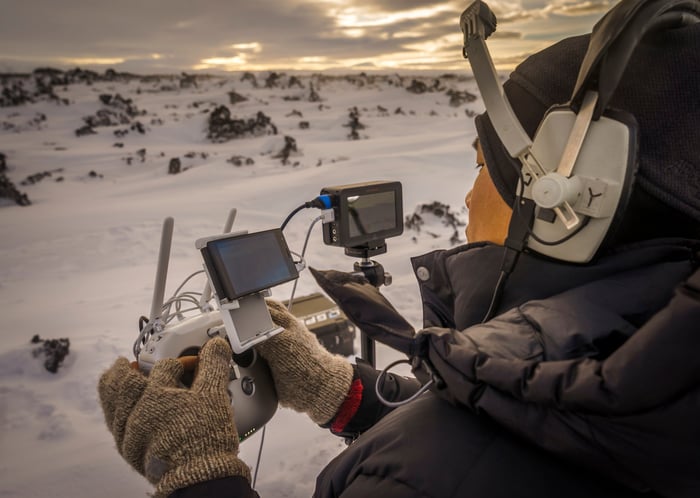 Shares of AeroVironment took a much bigger hit Wednesday afternoon, falling 13%. The maker of unmanned aerial vehicles and other cutting-edge technology released quarterly and full-year results that fell short of what more bullish investors had hoped to see.

AeroVironment's numbers were mixed. Revenue  for the fiscal fourth quarter inched higher by less than 1%, underwhelming investors with higher expectations. Yet adjusted earnings of $1.04 per share jumped nearly 40% year over year. Full-year fiscal sales climbed at an 8% pace, while adjusted earnings were higher by 14% from fiscal 2020 levels.

The big question is whether AeroVironment can successfully integrate its recent acquisitions. A wider variety of drones would potentially help the company meet the needs of more current and prospective customers.

Meanwhile, AeroVironment has set reasonably high expectations for fiscal 2022, including sales guidance of $560 million to $580 million and adjusted earnings of $2.50 to $2.70 per share. If it can reach those goals, then AeroVironment might finally get the lift its stock needs to reach new all-time heights.