Shares of the low-code software maker gained last month with the help of a short squeeze.

Shares of Appian (APPN -2.35%) surged 52% in June, according to data from S&P Global Market Intelligence, although there was no major news out on the low-code cloud software maker. Instead, the stock seemed to benefit from some positive analyst chatter and what appeared to be a short squeeze as investors drove a number of meme stocks higher.

The chart below shows the stock gained steadily over the course of the month. 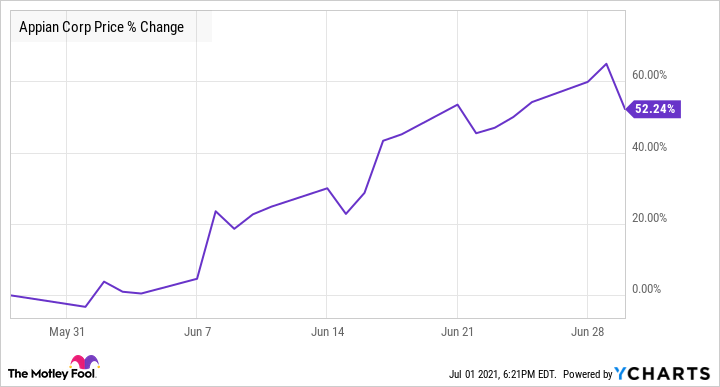 Though Appian has not gotten direct attention from the Wall Street Bets crowd, known for pumping up stocks like AMC Entertainment and GameStop, it has benefited from similarly timed short squeezes, both early in the year and once again in June. The rally started on June 8 when the stock jumped 18.1% on high volume even as there was no news out on the stock. The stock bounced again on June 17, gaining 11.3% after research firm Hedgeye published a bullish note on the stock, saying it has the ability to triple product demand and that it should become the No. 1 low-code software company. Appian shares continued to climb over the rest of the month, helped by a rising tide in growth and tech stocks.

As of mid-June, 17% of Appian shares were sold short. That's not a huge percentage, but it's enough to make short-sellers sensitive to single-day pops, especially after the stock rocketed higher over a three-month period that started with its earnings report last November. Shares more than tripled during that time, but then gave back most of those gains.

Appian looks like a promising growth candidate as low-code technology, which allows companies to easily deploy apps without the need to write code, seems to have hit a tipping point during the pandemic. Management also guided for 39% to 40% revenue growth in its cloud subscription segment for the second quarter of 2021, which would be its fastest growth in its history.

While the stock is expensive, trading at a price-to-sales ratio above 30, the series of short squeezes should help give investors confidence that any pullback in the stock will be limited.