Nano-X Imaging (NNOX 1.86%) is creating a lot of heat these days -- the stock is down 27% this year but up more than 33% over the past month. That's particularly ironic because the company's breakthrough X-ray imaging device is based on not creating too much heat.

Typically, X-rays, MRIs (magnetic resonance imaging), and CAT (computer axial tomography) procedures all require large pieces of equipment that take up lots of space and can cost between $60,000 and $2.1 million, depending on the machine. That, in turn, makes the cost of their scans more expensive, and thus available mainly in first-world nations. Nano-X estimates that two-thirds of the world's population has no access to such critical medical X-ray technology because of the size and cost of the machines. 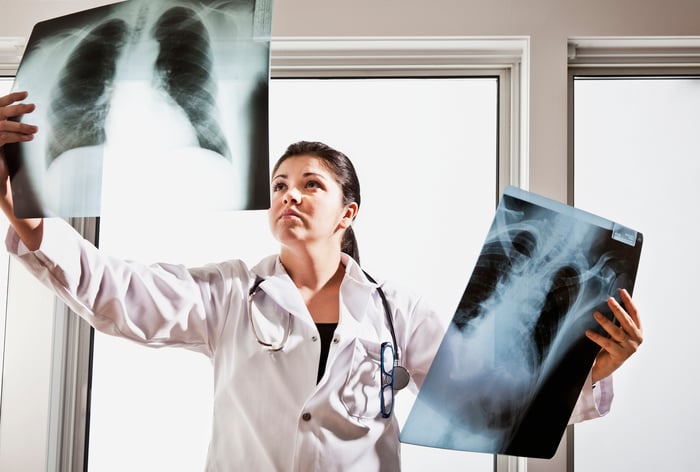 The reason X-ray machines are so large is that they rely on the Rontgen thermionic effect, discovered in 1895 by German physicist Wilhelm Rontgen. The electron streams necessary for an X-ray come from heating up a metal filament to 2,200 degrees Celsius. That means the machines must be built to produce and withstand that type of heating and cooling.

Nano-X (pronounced Nan-Ox) says it uses cold cathode technology, similar in a sense to what's used in flat-screen TVs, that extracts electrons from the metal cathode using an applied electric field. This means that Nano-X's machines can be smaller and produced for $10,000 per machine, a fraction of what other X-ray machines cost, Nano-X CEO Ran Poliakine said in an interview last September with The Motley Fool.

There's been plenty of skepticism around Nano-X's technology. One report by short-seller Muddy Waters Research said that the analysts there spoke to radiologists who likened the company to disgraced healthcare technology start-up Theranos. Citron Research compared the company to a "science project," with minimal research and development and fake customers. Both of those reports were released in September; there are fewer Nano-X doubters after the company showed its technology with a live demonstration in December.

The company gained further traction when in April, the U.S. Food and Drug Administration (FDA) gave clearance to its single-source Nano-X Cart X-ray system. Last week, Nano-X shares rose when it submitted to the FDA a 510(k) premarket notification application for its multisource Nanox.ARC 3-D digital tomosynthesis system, which is capable of more advanced 2D and 3D imaging such as done by a CT scan.

There are solid reasons to consider Nano-X a risk. It was founded in 2018, had its initial public offering just last August, and has no revenue. As of its first-quarter report, the company said it had $219 million in cash and had lost $7.1 million in the quarter. At that rate, it can go awhile without having to turn a profit, but bringing its machines to market won't be cheap.

Already, management said in the first-quarter earnings call that it's had to push back the date for its launch of its first 1,000 multisource Nano-X ARC machine from early 2022 to "sometime" in 2022. Ultimately, the company said it plans to deploy 15,000 units worldwide by 2024. Management says they're planning to keep equipment costs low, instead making much of its revenue by using a subscription-based model for each scan its machines produce.

Is it is worth the risk?

There are very few truly disruptive products, but Nano-X's machines certainly fit that bill. If the company can produce and sell its machines as inexpensively as it says, it will open up doors in markets that can't afford standard tomography machines now. This includes third-world countries, as well as many facilities in the United States, such as urgent-care facilities or single practitioners who can't justify the cost of an X-ray machine but could afford and use a Nano-X system.

There's already expected growth in the market for X-ray machines. Global Market Insights says the compound annual growth rate for X-ray technology is expected to be 5.7% between now and 2027, reaching $19.5 billion by that year.

Even if Nano-X has difficulty in its manufacturing, its technology would make it a worthwhile takeover target for the legacy companies that make digital imaging machines, such as Fujifilm Holdings, General Electric Healthcare, and Siemens.

Despite all this, I'd stay away from Nano-X for now unless you can afford taking a chance on such a speculative stock.

There are a lot of red flags here. We don't know whether this company can compete with established healthcare equipment makers, or what resistance it might face in adopting its technology. Of greater concern is that we don't know how long the company will take to turn a profit -- provided its technology is approved by the FDA.