Many people had never heard of Cathie Wood before 2020, but it didn't take long for her to achieve almost legendary status as an investor. Her ARK Invest exchange-traded funds all more than doubled last year, and despite some turbulence for the ARK Innovation ETF (NYSEMKT:ARKK) and her other offerings so far this year, many investors still see Wood as an innovative voice with an eye toward the trends that will define high-growth investing for years to come.

One of Wood's prevailing themes is financial innovation, and she sees Bitcoin (CRYPTO:BTC) and other cryptocurrencies playing a major role in changing the way people think about money. Late last month, ARK Invest made a move that could finally help get cryptocurrency  further into the mainstream, and many market watchers think that she might be able to succeed where so many others have thus far failed.

On June 28, ETF sponsor 21Shares US filed paperwork with the U.S. Securities and Exchange Commission to create the ARK 21Shares Bitcoin ETF. The intent of the ETF is to provide direct exposure to Bitcoin via shares that correspond to a certain amount of Bitcoin per share. 21Shares US is working with ARK Invest on the marketing front, and it hopes to use the ticker symbol ARKB if the SEC approves the ETF to begin trading, consistent with the tickers of ARK Invest ETFs. 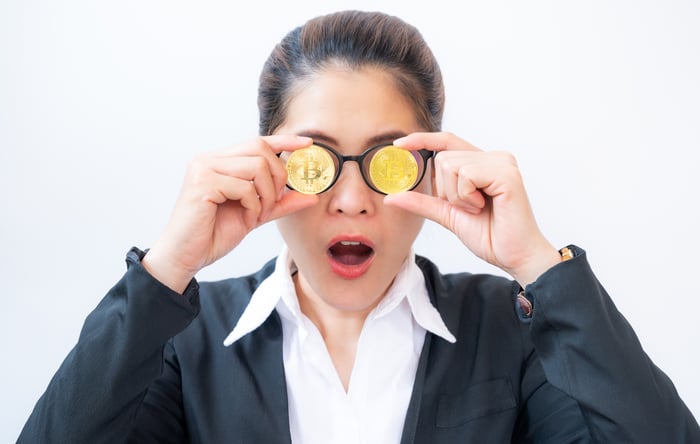 The fund will work in a manner similar to other ETFs. ARK 21Shares Bitcoin won't directly buy and sell Bitcoin itself, but institutional investors will be able to buy and sell large blocks of shares by depositing or withdrawing an equivalent amount of Bitcoin with the fund. That feature allows institutional investors to regulate the price of the fund's shares, avoiding the massive premiums and discounts that investors have seen with the Grayscale Bitcoin Trust (OTC:GBTC), which lacks the ability for institutions to make block share purchases and redemptions.

The ARK 21Shares Bitcoin ETF also plans to make its ETF available at a cost consistent with the other funds in its family. The proposed sponsor fee will be 0.95% per year, which is less than half Grayscale Bitcoin Trust's 2% annual fee.

Is the SEC ready for bitcoin ETFs?

Yet the big question facing Wood and ARK Invest is whether the SEC will actually move forward to approve a Bitcoin ETF. Other exchange-traded fund providers have been looking to create Bitcoin ETFs for years. As far back as 2013, the crypto-famous Winklevoss brothers sought to get a Bitcoin ETF available for investors. By 2017, several other well-known ETF companies had followed suit with proposals of their own. Yet the SEC based its decisions not to grant approval for Bitcoin ETFs at that time to the prospects for manipulation and fraud in the cryptocurrency markets.

Crypto bulls seem to think, however, that Bitcoin ETF approval is almost assured now. That stems in part from the fact that Canadian regulators have already allowed their own cryptocurrency ETFs to start trading. Greater levels of adoption, market transparency, and availability of other market infrastructure like futures contracts and options on futures are all points in favor of the SEC allowing a Bitcoin ETF finally to start trading.

Perhaps the biggest sign of a change of heart at the SEC is coming from its own ranks. SEC Chair Gary Gensler has a background in teaching about blockchain and cryptocurrencies at the Massachusetts Institute of Technology. Fellow SEC commissioner Hester Peirce has been even more outspoken , saying that crypto ETFs should have gotten approved years ago if the SEC had followed the standards it uses outside the cryptocurrency context.

Be ready -- but don't jump the gun

With major financial institutions increasingly adopting cryptocurrencies, Wood's Bitcoin ETF stands a good chance of winning approval sooner or later. That doesn't mean it will prove to be the best choice out among would-be competitors, but it might prove to be what finally gets the SEC to take action and allow the next stage of Bitcoin's evolution in the U.S. to begin.