CureVac (NASDAQ:CVAC) surprised investors a few weeks ago when it announced disappointing data from a trial of its mRNA vaccine candidate. Many expected the German biotech would follow in the footsteps of fellow mRNA vaccine makers Pfizer and Moderna. These market leaders have reported efficacy of more than 90%.

After the CureVac report, it looked like company's dreams of a spot in the vaccine market were over -- at least in the near term. Then CureVac surprised investors a second time by saying it would move forward with a regulatory submission. Now, the big question is: If regulators authorize the candidate, can it win a spot in this competitive market? 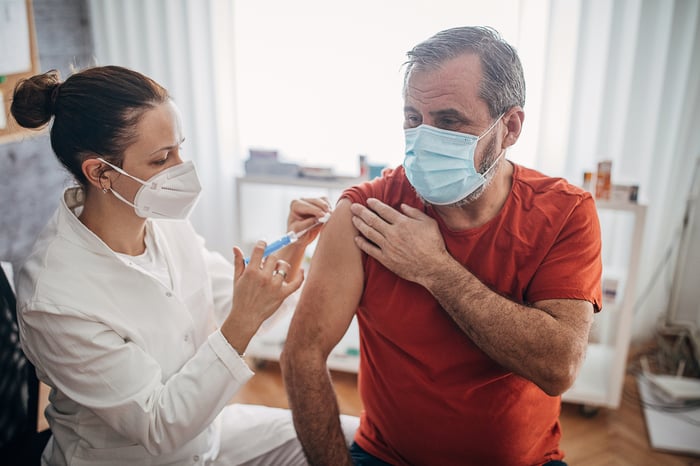 First, let's take a look at what CureVac reported. Last month, CureVac said its candidate didn't meet statistical criteria for success in the phase 3 trial. Efficacy was 47% -- but the company couldn't draw efficacy conclusions for participants over age 60. CureVac said the number of variants circulating -- at least 13 -- impacted the candidate's performance. The company also said it would wait until the final data analysis before deciding on its regulatory path.

Two weeks later, CureVac shared its final analysis of the vaccine candidate. It reported 48% efficacy in all age groups. This includes performance against 15 variants.

In the 18-to-60 age group, CureVac reported overall efficacy of 53%. In this group, it said the candidate was 77% efficacious against moderate and severe disease -- and 100% efficacious in the prevention of hospitalization or death. This also was in the presence of 15 variants.

Now, the company says it's in discussions with Europe's regulatory agency and is proceeding with its regulatory submission. CureVac didn't say if and when it may apply for authorization in other regions.

Europe, however, represents significant opportunity. The company already won an advance purchase agreement from the European Union for as many as 405 million doses. Europe struggled with supply shortages during the first stages of vaccine rollout, so in recent months, it's been more aggressive about procuring vaccine doses for the future. For instance, the EU signed a deal with Pfizer in May for as many as 1.8 billion more doses through 2023, and said other deals may be ahead.

It's clear that demand exists for vaccine doses. But the question now is whether CureVac can compete against stronger vaccines. It's possible Europe will move forward with its supply agreement if CureVac wins authorization. The region could use the potential vaccine specifically in the younger population, since efficacy is highest in this group.

But the overall low efficacy numbers will be a big hurdle when it comes to winning supply deals for next year and beyond. Moderna and Pfizer both have been ramping up production. That means they're getting better and better at producing and delivering more and more doses. It's very likely that countries will opt for these two over a player with lower efficacy.

And let's not forget Novavax. The biotech company reported more than 90% efficacy overall in its U.S. phase 3 trial, and plans on filing for authorization during the current quarter. Novavax is talking with the European Union about a potential supply deal.

Today, about 52% of European Union residents have received at least one dose of vaccine. And shortages aren't as widespread as they were at the start of vaccination campaigns. So, moving forward, countries may be more selective when it comes to ordering.

The story may not be over for CureVac. If regulators authorize its vaccine candidate, some revenue may be on the horizon. But the lack of solid efficacy is likely to be a major hurdle. One bright spot is CureVac's work on an investigational second-generation coronavirus vaccine. The company says its candidates use "new mRNA backbones." They also specifically target variants. So, it's possible that efficacy data for those will be much better than for the original vaccine candidate. CureVac says it expects to begin clinical trials this quarter, and possibly launch a resulting vaccine next year.

Still, for investors, CureVac represents a lot of risk at this point. Its current vaccine candidate probably will struggle if it enters the market. And we don't yet know whether the next-generation candidate actually will work in humans.

Some aggressive investors who like to get in very early on potential vaccine players may bet on CureVac right now. But most of us are better off waiting to see whether one of its next-generation candidates is stronger than its first.