Shares of 3D Systems (NYSE:DDD), a diversified 3D printing company, dropped 9.7% on Monday, probably because of usual volatility and, perhaps, some news from Desktop Metal.

For context, the broader market was up slightly on Monday, with the S&P 500 and Nasdaq indexes gaining about 0.3% and 0.2%, respectively. 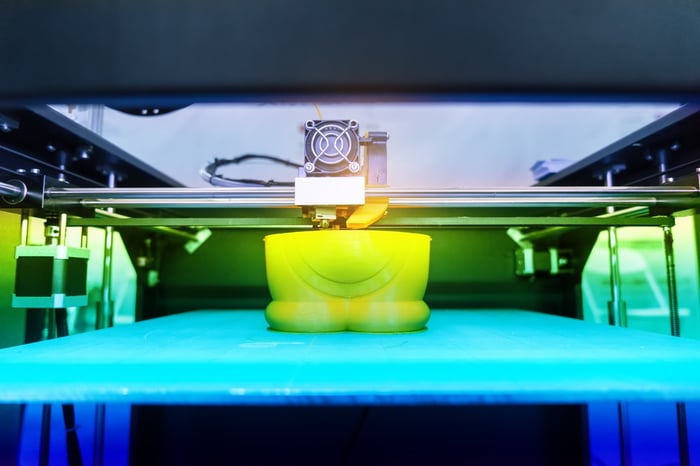 The only news 3D Systems announced on Monday was the scheduled date of the release of its second-quarter 2021 results: Monday, Aug. 9, after the market closes. The company plans to hold an analyst conference call the next day at 8:30 a.m. EDT.

It's safe to say that this news, which isn't out of the ordinary, was not a catalyst that contributed to the stock's decline.

A good portion of 3D Systems stock's Monday drop was probably simply due to its usual volatility. The stock tends to be more volatile than most of the other 3D printing stocks. One reason for this is that it usually has a higher short-interest than comparable peers, such as Stratasys. (Short-sellers bet on a stock's decline.) For context, shares of Stratasys, Desktop Metal, and Materialise fell 3.7%, 2.3%, and 2.2%, respectively, on Monday.

It's possible that Desktop Metal's Monday announcement of an acquisition could have also been a factor behind 3D Systems stock's decline. Desktop (which went public via a special acquisition purpose company last December) acquired Belgium-based Aerosint, whose "new, multi-material approach to powder deposition is designed to support high-speed printing of a broad range of polymers, metals, and ceramics," according to the press release.

Some investors might believe that Desktop's acquisition could make it a more formidable competitor to 3D Systems.

No action seems warranted by investors based solely on 3D Systems stock's Monday drop. With the company's Q2 results now slated to be released on Aug. 9, investors should receive material news soon.