Shares of movie theater giant AMC Entertainment (NYSE:AMC) rose an almost unbelievable 2,573% in the first six months of 2021 according to data from S&P Global Market Intelligence. You could drop two digits off of that (on either side) and it still would have been a great showing for such a short period of time. The problem is that the stock performance had almost nothing to do with the company's business performance.

AMC Entertainment has been one of the biggest Reddit stocks, with message board denizens pushing the gains to absolutely stratospheric levels. This, however, is all based on emotion and that can change in an instant on Wall Street. Several times the stock had plunged wildly and, just halfway into July, the stock is now "only" up 1,750% or so for the year. This is not the type of stock that will lead to a good night's sleep for conservative investors. 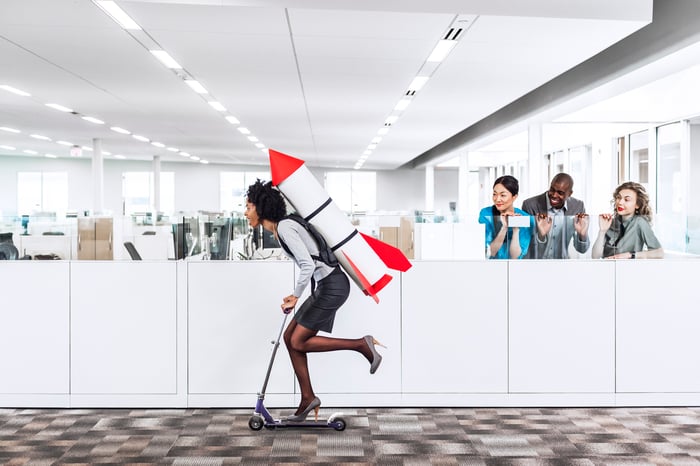 More troubling is that all of the price gyrations have very little to do with the underlying business, which remains troubled. For example, first-quarter revenue was off by 84% year over year. The per-share loss improved from $2.22 in the first quarter of 2020 to a loss of $1.42 per share in the first quarter of 2021, but that's still pretty terrible. And, thanks to the Reddit-driven rally, AMC has been able to issue new shares with virtual abandon, increasing the average share count from around 100 million shares at the end of the first quarter in 2020 to over 400 million in 2021. Taken together, these moves suggest AMC is struggling and desperate for cash.

The headlines from the past weekend trumpeted "record" numbers for Walt Disney's Black Widow, but that's only true if you are looking at post-pandemic ticket sales. In any other period the turnout for this blockbuster would probably have been considered modest. But, notably, Disney generated $60 million (nearly 30% of the global box office take) from sales across its Disney+ service. This is a game changer for theater operators, given that Disney has to share theater ticket revenue, but not revenue from its streaming service. In other words, long-term investors should tread with great caution in this Reddit favorite because things are nowhere near back to normal and may never get there at all -- despite the price today being well higher than pre-pandemic levels.