Shares of Novavax (NASDAQ:NVAX) soared 90% in the first half of 2021 as the company reported plenty of good news that served as catalysts. Probably the most important, though, was its announcement on Jan. 28 that its COVID-19 vaccine candidate NVX-CoV2373 achieved 89.3% overall efficacy in a late-stage clinical trial conducted in the U.K.

At one point, the vaccine stock was up nearly 190% year to date. However, Novavax gave up some of those gains as investors shifted away from growth stocks earlier this year. The company also initially expected to file for Emergency Use Authorizations (EUAs) of NVX-CoV2373 in the second quarter of 2021 but announced in May that it was pushing the timing of the regulatory submissions back to the third quarter. 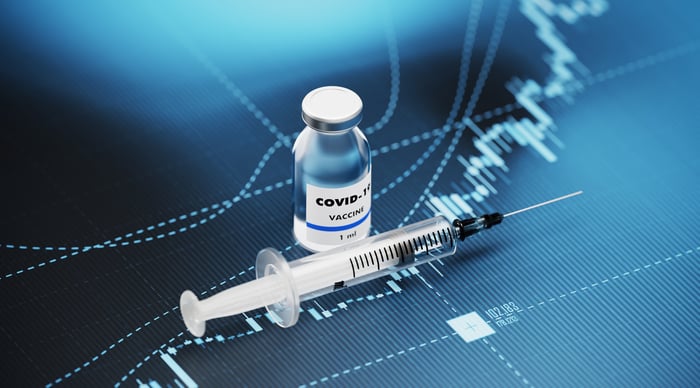 Stocks tend to move higher as their earnings expectations increase. The closer that Novavax's COVID-19 vaccine gets to winning EUAs, the more tangible the company's potential to make a lot of money will be.

Analysts think that Novavax could generate revenue of more than $2 billion this year if NVX-CoV2373 wins EUAs in the U.S., U.K., and Europe. That estimate isn't unrealistic considering that the company has already lined up supply deals with several countries and locked up an agreement to supply 1.1 billion doses to the COVAX Facility network for distribution to low- and middle-income countries.

All eyes are now on Novavax's anticipated EUA filings within the next couple of months or so. More information about these regulatory submissions could be on the way with the company's second-quarter update scheduled for Aug. 5.