Novavax has extended its gain this year. But it's lost a considerable amount of momentum after the company fell behind schedule in its plan to request regulatory authorization. Novavax plans on a submission in the third quarter, missing its earlier goal of the second quarter.

But that doesn't mean you should flee shares of this dynamic biotech company. Many smart investors continue to buy Novavax stock. Here are three things they know about the company that are inspiring them to stay invested for the long term. 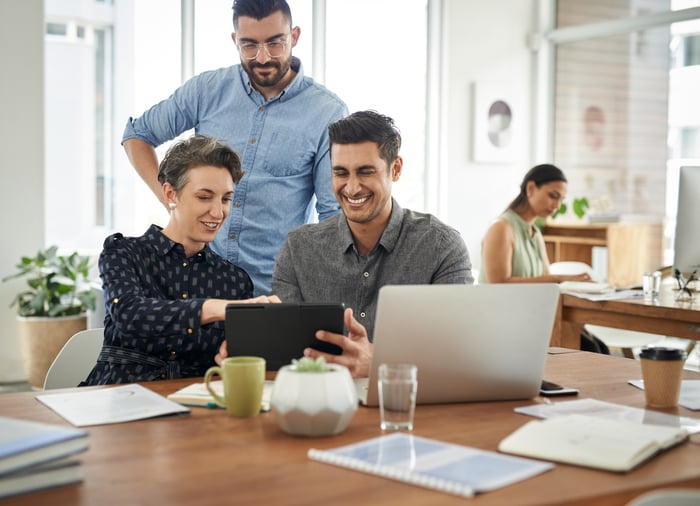 1. Efficacy data may score a win

It's impossible to do a complete apples-to-apples comparison of Novavax with more advanced rivals Pfizer and Moderna. Novavax's U.S. phase 3 trial began in December, and researchers gathered follow-up data from late January through April 30. The latest data from Pfizer's and Moderna's phase 3 trials includes a six-month follow-up on vaccinated participants. And we also have seen some real-world reports on their vaccine performance.

Still, Novavax's data offers us clues about what to expect. The company reported 90.4% overall efficacy -- that includes the prevention of cases of any severity. Novavax showed 100% efficacy in the prevention of moderate to severe illness.

Starting off with strong performance is key. As time goes by and more cases accrue, efficacy often heads slightly south. But vaccines that started strong -- like those of Pfizer and Moderna -- usually maintain strength. Right now, Novavax's numbers suggest it may follow in the footsteps of its more advanced rivals when it comes to efficacy.

Some Novavax investors frowned as they saw Pfizer and Moderna dominating the U.S. vaccine landscape. The U.S. ordered enough vaccine doses from both companies to cover almost all Americans. Of course, Novavax already has an order from the U.S., but the company is arriving late -- so it may not benefit from new U.S. orders in the near term.

There's a big bright spot ahead for Novavax, and that's international demand. The company is involved in discussions with the European Union for a contract there. The group of countries has struggled to roll out vaccines to everyone.

Some EU countries have shied away from AstraZeneca and Johnson & Johnson jabs due to rare blood clots in certain individuals. And CureVac -- a German biotech with a big advance purchase agreement for the EU -- recently reported disappointing efficacy data in a phase 3 trial of its candidate.

All of this means there is opportunity for Novavax to win new orders in the near term and beyond.

3. Novavax has a key to long-term revenue

Novavax said in its latest earnings report that it expects billions of dollars in revenue over the next four to six quarters, which is great news. But what's even better is the company's also working on a potential product that may result in billions over the long term.

I'm talking about a combined flu/coronavirus vaccine. The idea of one vaccine annually to prevent flu and coronavirus infection sounds quick and easy -- for both healthcare systems and individuals who don't want to get sick.

Of course, Novavax isn't the only one on this path. Moderna also is investigating a combined vaccine. But Novavax has one particular advantage: The company already has brought a flu vaccine candidate successfully through clinical trials.

Last year, Novavax reported that NanoFlu met all primary endpoints in a phase 3 trial. The plan is to combine NanoFlu with the current investigational coronavirus vaccine. Novavax's strengths in flu vaccine development put it in a great position to develop this combined candidate. The company plans to begin clinical trials later this year with a goal of commercialization in 2025.

"Our unique COVID flu combo will come out on top in the long run," compared with coronavirus-only shots, CEO Stanley Erck said in the earnings report.

Even if Moderna brings a combined product to market, the outlook remains bright for Novavax. As we've seen with the coronavirus vaccine, there's room for more than one player in the global market.

Novavax may have disappointed investors from a timeline point of view in recent months, but once the company submits its vaccine candidate to regulators, I expect positive momentum to return. From that point, some of those things smart investors know now may actually take root -- and offer the shares a lasting boost.