Please ensure Javascript is enabled for purposes of website accessibility
Log In Help Join The Motley Fool
Free Article Join Over 1 Million Premium Members And Get More In-Depth Stock Guidance and Research
By Rekha Khandelwal - Jul 16, 2021 at 8:03AM

Can Bloom Energy succeed in doing what other fuel cell companies couldn't do?

There has been lots of hype surrounding fuel cell stocks lately. Undeniably, hydrogen fuel cell technology offers a great solution to two key issues -- the unreliability of renewable power and the emissions from fossil fuels. It has the potential to provide clean, reliable power for several uses.

A key limiting factor in the widespread adoption of hydrogen fuel cells in the past was cost, which has clearly come down significantly over the years. Let's analyze which of the two fuel cell companies -- FuelCell Energy (FCEL 6.90%) or Bloom Energy (BE 4.32%) -- looks better-placed to benefit from the industry tailwinds.

Bloom Energy offers fuel-flexible cells, which can take hydrogen, biogas, or natural gas as inputs to generate electricity. Instead of combustion, Bloom Energy's solid oxide fuel cells generate electricity through an electrochemical process, thereby reducing emissions. These emissions can be eliminated completely if hydrogen is used as an input fuel.

In April, Bloom Energy deployed its first fuel cells that run solely on hydrogen, in South Korea. This month, the company also unveiled its electrolyzer, which it believes will produce green hydrogen at the lowest cost compared to other options available on the market. Bloom Energy expects to start commercial shipments of its electrolyzers in fall 2022. By comparison, FuelCell Energy uses carbonate fuel cell technology, which also takes natural gas or renewable gas as inputs. FuelCell Energy is also working on solid oxide fuel cells with an aim to eventually run them on hydrogen. While it aims to ultimately offer hydrogen production, storage, and power generation using hydrogen, FuelCell Energy has so far only delivered fuel cells running on natural or renewable gas. The company is developing a facility to generate electricity from hydrogen. The facility will also produce hydrogen through electrolysis as well as gas reforming.

FuelCell Energy has not been able to grow its revenue in recent years. That's a key concern, as bulk production is going to play a crucial role in helping fuel cell companies achieve profitability. 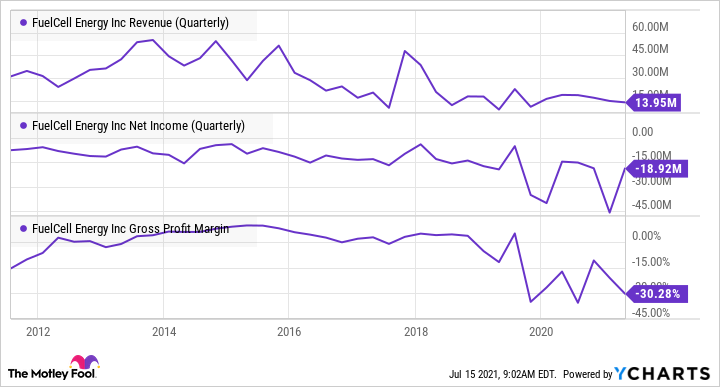 As the above graph shows, FuelCell Energy's revenue has been on a downward trend for the past several years. Moreover, the company continues to incur losses. Its gross margin has also fallen in the last couple of years. While profitability remains fuel cell companies' key challenge, they have at least been able to grow revenue. As such, FuelCell Energy's lack of revenue growth is surely concerning. 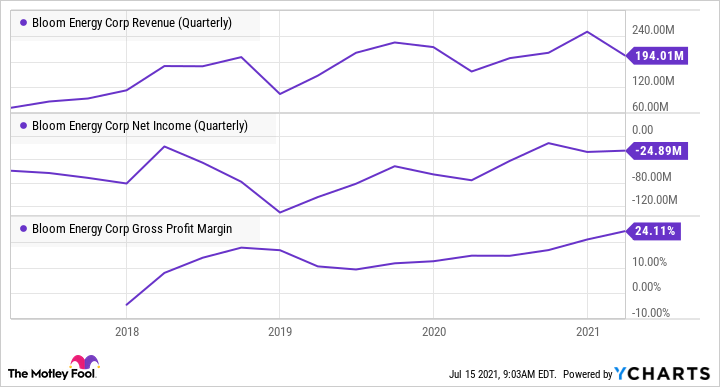 BE Revenue (Quarterly) data by YCharts

As the above graph shows, Bloom Energy's key metrics all seem to be moving in the right direction. The company expects its cash from operations to approach positive for full year 2021. It also expects non-GAAP operating margin of around 3% for the year.

This fuel cell stock is a better buy

Bloom Energy seems to be taking the right steps toward profitability. Rather than going for hydrogen right away, it is slowly transitioning toward hydrogen. This approach has allowed it to generate better margins than peers, while also letting it weigh market opportunities before jumping into the hydrogen fuel cells market.

Yet, high customer concentration and a competitive market are key challenges even for Bloom Energy. The company is yet to prove that it can profitably commercialize its hydrogen fuel cells and electrolyzers. Given the uncertainties, only investors with a high appetite for risk should consider investing in Bloom Energy stock.