Please ensure Javascript is enabled for purposes of website accessibility
Log In Help Join The Motley Fool
Free Article Join Over 1 Million Premium Members And Get More In-Depth Stock Guidance and Research
By Rich Smith - Updated Jul 21, 2021 at 8:31AM

A new $155 million drone could generate $11.1 billion in sales for Boeing.

Editor's note: This article has been corrected. The current ground control station for the MQ-25 was developed by the Navy.

Three years ago Boeing (BA -0.88%) landed an $805 million development contract to build MQ-25A "Stingray" drones for the U.S. Navy, with the promise of billions more as the Navy built out a fleet of 76 of the remotely piloted, carrier-capable aerial refueling aircraft.

Over the last three years, Boeing has developed and tested the new drone tanker, conducted "extensive simulations of aerial refueling," and run a total of 25 actual test flights. Last month, all that hard work paid off with the successful completion of the first-ever successful in-air refueling of a Navy fighter jet from an unmanned drone -- setting the stage for Boeing to collect the rest of its billions in revenue. 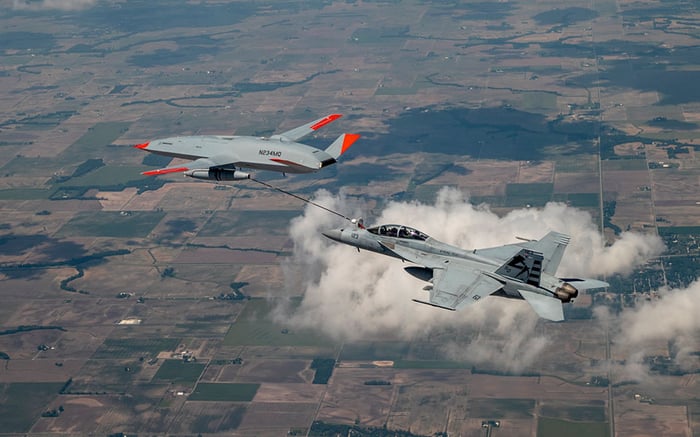 As UNSI News reports, on June 4, 2021, Boeing's "T1" prototype flew out of Illinois, accompanied by a Navy F/A-18F fighter jet. Mid-air, the fighter connected to the drone's fueling hose-and-drogue and received 325 pounds of aviation fuel.

That's not a lot -- only about 1% of the F-18's total fuel capacity. And with the MQ-25A expected to carry 15,000 pounds of fuel, it will take two of them to fill up an F-18 entirely. But it was enough to prove the concept, and advance the T1 prototype to the next stage of testing.

In this next stage, the T1 will be shipped to Norfolk Naval Station in Virginia later this year to undergo "deck handling trials" aboard a U.S. Navy carrier. Meanwhile, Boeing will get to work developing an even more advanced "engineering and manufacturing development" (EMD) prototype that will be specifically designed to conduct take-offs and landings at sea, including ensuring that the aircraft is resistant to corrosion in a salt water environment.

The first such EMD prototype is expected to be flying by 2022, and if all goes well, low-rate initial production of the drone could begin as soon as 2023, with full-rate production scheduled to start in 2026.

The Navy has simultaneously contracted Lockheed Martin (LMT -0.40%) to build a new ground control station for the MQ-25. In the future, the Navy wants "common control standards and systems" that are interoperable and capable of controlling more than just one kind of drone, unmanned carrier aviation program manager Capt. Chad Reed was quoted as saying.

What does it mean for Boeing?

That's good news for Lockheed Martin, which lost out to Boeing in the competition to build the MQ-25 back in 2018, but will now at least get something out of the drone's development. It could be even better news for Boeing, though.

If the Navy is looking ahead to a day when multiple models of autonomous drones will fly off of its carrier decks controlled by a common controller, then that should give Boeing multiple opportunities to bid to build all of those new kinds of drones. Indeed, the lead the company has taken in drone development by winning the MQ-25 contract should give Boeing a leg up on winning those contracts.

In the meantime, according to the latest Weapons Systems Annual Assessment by the Government Accountability Office, estimates for the MQ-25's total development cost have declined since the program began, and now come in at about $2.3 billion. Acquisition costs for a full fleet of 76 MQ-25s, exclusive of these development costs, should total $8.8 billion, resulting in a total program cost of about $11.1 billion -- and a unit cost of just $155 million per drone.

The fact that this purchase price is 12% below initial estimates suggests Boeing is now in possession of that rarest of franchises in the defense business -- a product that costs less than advertised. I have to imagine that bodes well for the prospects of the Navy ordering up more drone models in the future -- and for Boeing winning the contracts to build them.