Please ensure Javascript is enabled for purposes of website accessibility
Log In Help Join The Motley Fool
Free Article Join Over 1 Million Premium Members And Get More In-Depth Stock Guidance and Research
By Kody Kester - Jul 18, 2021 at 5:21AM

AngioDynamics exceeded analyst expectations on revenue in Q4 2021, but does that make it worth buying?

Many investors may never have heard of AngioDynamics (ANGO -0.29%), which produces "minimally invasive medical devices" to treat peripheral vascular disease and cancer, according to its website.

Lest the investor community assume that this net sales beat was unsustainable, President and CEO Jim Clemmer pointed out in the earnings call that Q4 revenue represented an 8% rise over the third quarter.

Because coronavirus headwinds sharply dampened results in Q4 2020, management believes the 8% figure is a more accurate measure of its actual momentum. 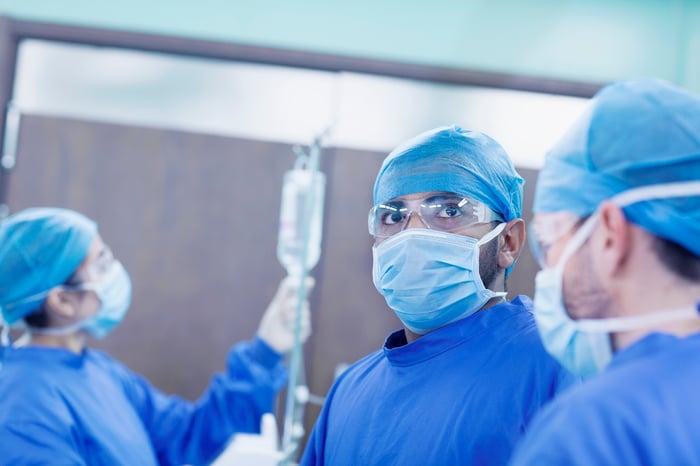 Non-GAAP adjusted earnings per share (EPS) for the quarter came in at analyst expectations of $0. This was a notable improvement over the $0.06 loss seen in Q4 2020, when COVID-19 was leading many people to postpone elective surgeries. This particularly affected the company's VenaCure EVLT varicose vein treatment and certain oncology products.

Citing growth platforms such as Auryon (a peripheral arterial disease technology the company says "efficiently and repeatedly treats any lesion type, any lesion length, at any lesion location"), NanoKnife (a cancer treatment that recently received FDA approval for a 100-patient study to establish its efficacy in treating prostate tumors), and the anticipated launch of the AlphaVac Mechanical Thrombectomy System (for which the company also received FDA clearance after the end of Q4), AngioDynamics is forecasting $305 million to $310 million in net sales for FY 2022. That's up significantly from $291 million in FY 2021 and $264 million in FY 2020.

As the effects of COVID-19 are expected to continue lessening with each passing quarter, AngioDynamics anticipates that its gross margin will improve from 53.9% in FY 2021 to 55% in FY 2022, which the company believes will allow it to generate $0 to $0.05 in adjusted EPS for FY 2022 as it continues to invest in R&D, sales and marketing, and product launches.

Although management didn't provide an estimate of the cost of the AlphaVac Mechanical Thrombectomy System product launch, it's safe to assume that it will be several million dollars at the least. Fortunately for AngioDynamics, the company's cash position is relatively steady. While cash on the books declined from $54.5 million at the end of Q3 2021 to $48.2 million in Q4, the company also reduced its long-term debt obligation from $30 million in Q3 to $20 million in Q4.

AngioDynamics has $28.2 million in cash net of long-term debt, and the reason management has likely chosen not to pay that debt off entirely is because they view the business as more of a growth company, one that is looking to develop and launch products to bolster its revenue and eventually its earnings.

The balance sheet is in an admirable position for a growth-focused company, which should allow for aggressive research and development and product launches to drive revenue and earnings expansion.

Worth a look for patient growth investors

Coming off a rebound from COVID-19 headwinds with a recent FDA clearance on its AlphaVac Mechanical Thrombectomy System, AngioDynamics appears well positioned to finance upcoming product launches. If the FDA does ultimately give the green light on the commercial expansion of NanoKnife to treat prostate cancer, the company would be entering a global prostate cancer treatment market that Fiors Market anticipates will grow revenue at 5% annually from $7.2 billion in 2019 to $10.7 billion by 2027.

Seizing a measly 2% of this market by 2027 would result in an additional $214 million in revenue for the company, which would represent a 74% increase over FY 2021's $291 million revenue base alone.

Even in a worst-case scenario in which NanoKnife isn't allowed to expand indications into prostate cancer, the future appears bright with the upcoming launch of AlphaVac to complement the existing AngioVac. Management believes that the launch of AlphaVac (slated for the end of this calendar year) will help the company to "serve a much larger segment of the venous thromboembolism market" while also not cannibalizing sales from the AngioVac portion of the business.

The launch of AlphaVac within the venous thromboembolism (VTE) market, as well as increasing market acceptance of the existing AngioVac and Auryon platforms, is likely to translate into tens of millions of dollars of additional annual revenue over the next few years; the VTE market is positioned to grow by 8.7% annually from $950 million in 2020 to $1.7 billion by 2027. AngioDynamics' robust vascular trifecta of AlphaVac, AngioVac, and Auryon, as well as the prospect of NanoKnife's expansion into treating prostate cancer, provide ample growth avenues to which the company can allocate its cash stockpile in the years ahead.

As a result, I believe that growth-oriented investors with a long-term horizon would be wise to consider AngioDynamics below $27 a share.

Should You Buy This Under-the-Radar Growth Stock?

Is This Small-Cap Medical Devices Stock a Buy?

Is This Under-the-Radar Medical Devices Stock a Buy?