This biotech company could be a diamond in the rough -- for investors who can tolerate its share price volatility.

Biogen (BIIB 1.27%) hasn't been all that successful in wooing investors lately. The biotech's shares are currently valued at just 5 times sales and 19 times earnings, and over the past year, they've gained just 25%, far below the S&P 500's 40% return.

Furthermore, almost all of those gains came in response to the U.S. Food and Drug Administration's (FDA) conditional approval of Biogen's Alzheimer's disease drug, Adulhelm. That catalyst has been feeling progressively shakier over the past weeks. Is this a stock that investors can count on? 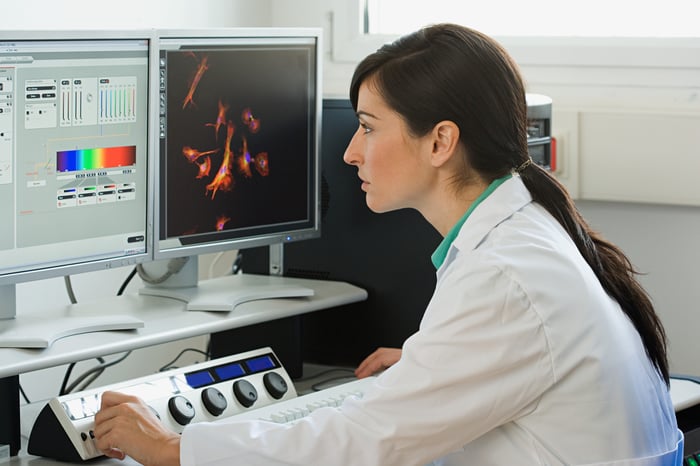 On July 12, Medicare officials began a review of Adulhelm to decide who can receive it based on whether the drug is a reasonable and necessary treatment. It's the first of those two criteria that's going to create problems. In clinical studies, Adulhelm decreased the volume of beta-amyloid plaques in patients' brains; those plaques are theorized to cause Alzheimer's disease symptoms. The key word here is "theorized," though, as reducing them failed to translate into any meaningful improvements in patients' cognition.

Despite its questionable effectiveness, the drug could cost the Medicare program as much as $57 billion a year (at a price tag of $56,000 per patient annually) if made available to all U.S. Alzheimer's sufferers. In that light, it would be understandable if Uncle Sam hesitated to cover the drug. In addition, FDA Interim Commissioner Janet Woodcock is calling for an independent investigation into the approval of Adulhelm by the agency. FDA officials allegedly worked "hand in hand" with Biogen representatives to get the drug approved, even though it failed to meet the primary endpoints in clinical studies.

Bad news seems to always come in waves. Last June, Biogen lost a patent litigation fight to save its blockbuster multiple sclerosis drug, Tecfidera, from generic competition. As a result, in Q1 2021, sales of Tecfidera fell by 56% year over year to $1.693 billion. Branded drugs typically lose 90% of their revenue after generic versions enter the marketplace.

What's more, last month, Biogen and Sage Therapeutics (SAGE 2.41%) delivered a tepid report from a phase 3 study of their antidepressant candidate Zuralone. The drug demonstrated statistically significant improvements in terms of alleviating depressive symptoms, but its effects were not impressive relative to antidepressants already on the market. This was Sage's leading pipeline candidate. Biogen had made a $1.5 billion investment in Zuralone in the hopes that it would outperform in clinical studies.

All is not yet lost

Fortunately, that's about it for Biogen in terms of the bad news. Right now, the company has seven late-stage candidates in its pipeline, the most promising of which are biosimilars for the blockbuster ophthalmological drugs Lucentis and Eylea. Biogen also has biologics in phase 3 trials targeting lupus, lateral sclerosis, choroideremia, and hemispheric infarction.

Overall, Biogen anticipates it will generate up to $10.75 billion in revenue and $19 in earnings per share (EPS) for the full year. Those targets represent substantial declines from the $13.445 billion in revenue and $33.70 in EPS it delivered in 2020. However, the company's stock largely has the negative elements priced in. Even if Tecfidera sales go to zero, Adulhelm fails in commercialization, and Zuralonone sales go nowhere, it still has a strong late-stage pipeline to fall back on. Therefore, I think Biogen stock is a good buy on this dip.