Markets finished the week on an unexpectedly high note.

The stock market moved generally higher on Friday, with the S&P 500 climbing to a new all-time high. The Dow Jones Industrial Average and Nasdaq Composite also moved higher, although they both still have a bit further to climb before claiming records of their own.

Helping lift the spirits of investors wasn't easy, but strong earnings reports did the trick. Snap (SNAP 1.16%) was the big winner on the day, as the rising social media giant saw its market capitalization rise above the $100 billion mark. However, even with much smaller percentage gains on the day for its stock, American Express (AXP 1.26%) also made an important impression with implications for the entire consumer economy.

Shares of Snap soared 24% on Friday. The gains came after the Snapchat parent company reported extremely strong financial results for the second quarter of 2021 late Thursday. 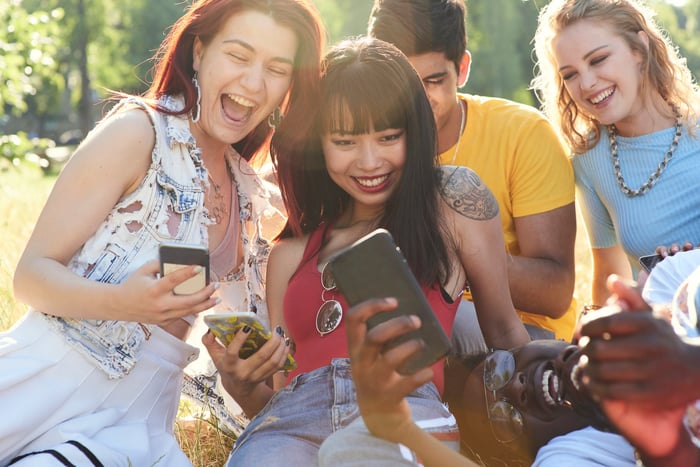 The size of the gains was astounding. Revenue soared 116% year over year, falling just short of $1 billion for the quarter. Net losses narrowed by more than half from year-ago levels, and when you account for extraordinary items, adjusted earnings per share came in at $0.10 per share, reversing a year-ago loss of $0.09.

Snap continued to attract users to its platform. Daily active users rose by 55 million compared to 12 months ago, coming in at 293 million. Snap is getting more popular both in its home North American market and in Europe and the rest of the world.

More features are a key reason for the gains. Snap boasted innovations with its Lens Studio filters and the Connected Lenses augmented reality product, and it made big investments in both content development and its partnerships.

With Snap expecting 58% to 60% revenue growth for the third quarter despite increasingly difficult comps from last year's numbers, investors are pleased about what they're seeing. After a long wait after its IPO several years ago, Snap finally appears to be making good on its potential.

Consumers aren't leaving home without it

Shares of American Express didn't get nearly the boost that Snap did. But investors were still pleased enough with the card giant's second-quarter results to give the stock a 1.25% rise.

American Express' quarterly numbers clearly showed the recovery of the consumer from the COVID-19 pandemic. Total revenue net of interest expense was up 33% to more than $10.2 billion. Net income soared almost ninefold to $2.28 billion, and earnings of $2.80 per share topped what most investors were expecting to see from American Express.

Helping to boost net income was AmEx's decision to release $866 million from its credit reserves, a dramatic reversal from the $1.55 billion in added provisions for credit losses in the year-earlier period. Consumers have been able to get through the pandemic in healthier financial condition than many had feared 12 months ago, and the decision to free up reserves dropped straight to AmEx's bottom line.

With write-offs having fallen by two-thirds from where they were just nine months ago, American Express has done a great job managing its risk. The future looks brighter for the economy, and AmEx is in a good position to take full advantage as consumers get more willing to spend.

Why Snap Snapped Back While Ford Stalled Out
409%