The saga for control over Canadian energy infrastructure company Inter Pipeline (IPL) appears to be over after Pembina Pipeline (PBA -0.51%) terminated its merger deal. That move came after Brookfield Infrastructure (BIP -1.35%) (BIPC -0.95%) boosted its offer, which won the support of two key proxy advisors.

Here's a closer look at the deal and what Inter Pipeline brings to the table. 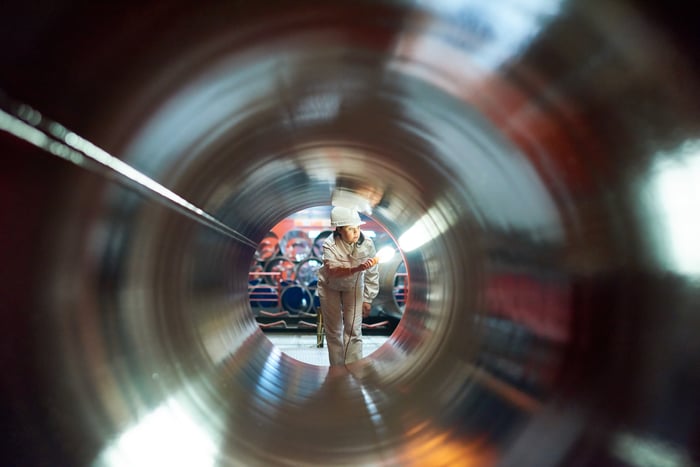 Digging into the winning proposal

Brookfield Infrastructure has been trying to acquire Inter Pipeline since last September. It went public with its cash-and-stock offer in early February, valued at 16.50 Canadian dollars ($13.13) per share. That price represented a 23.8% premium. However, the company said it could boost its offer to CA$17-CA$18.25 ($13.52-$14.52) per share if Inter Pipeline would grant it access to information so that it could complete its due diligence.

Inter Pipeline rejected Brookfield's offer and eventually agreed to a merger proposal with Pembina. The all-stock deal valued the company at CA$19.45 ($15.47) per share.

However, Brookfield continued to tweak its offer. Its latest proposal was for CA$21.23 ($16.89) per share, which included the option for investors to accept all cash, all stock, or a combination. That pushed its offer 8% above Pembina's proposal. With Pembina unwilling to raise its bid, Brookfield has emerged as the winner now that Pembina has terminated its merger agreement.

In addition, Inter Pipeline is building a large-scale petrochemical complex in western Canada. It expects to complete this project by year-end and start operations in early 2022. The company has secured long-term take-or-pay contracts for about 70% of its anticipated annual output. Because of that, it should generate CA$400 million to CA$450 million ($318 million to $358 million) of adjusted EBITDA in 2023 when it's fully operational, and CA$450 million to CA$500 million ($358 million to $398 million) over the long term. That's a significant uplift for Inter Pipeline, which generated CA$969 million ($771 million) in adjusted EBITDA last year.

By acquiring Inter Pipeline, Brookfield will benefit from the stable cash flows of the company's existing oil and natural gas liquids (NGL) infrastructure. In addition, it will capture the upside of the petrochemical project, which will deliver significant earnings growth over the next few years.

Those factors will enhance Brookfield's ability to grow its funds from operations (FFO) and dividend. Its existing organic growth drivers have it on course to expand FFO per share by 6% to 9% per year. In addition, Brookfield believes that its capital recycling program of selling mature assets to fund new investments like the Inter Pipeline transaction will add another 1% to 5% to its FFO per share each year. That outlook supports its plan to grow its 3.7%-yielding dividend at a 5% to 9% annual rate.

Brookfield appears to have won the battle for control over Inter Pipeline. While it will end up paying a much higher price than it initially offered, that's due in part to the significant improvement in the oil market and Inter Pipeline's progress on its petrochemical project since Brookfield launched its takeover attempt. Even after factoring in the higher price, the deal should move the needle for Brookfield as it will enhance its cash flow profile and growth prospects. That should enable the company to continue growing shareholder value in the coming years. That makes it a great stock to hold for the long haul, especially for income-seeking investors, given its high dividend yield and visible growth prospects.