Consumer demand for seltzer has fallen off the table, and these brewers have invested a lot in the space.

Hang on, it's about to get ugly. After Boston Beer (SAM 1.10%) reported earnings last week that were decimated by a dramatic slowdown in the hard seltzer market, investors might want to brace for impact as both Anheuser-Busch InBev (BUD 1.04%) and Molson Coors (TAP 1.09%) are prepared to report their own financial results this week.

Since both brewers have invested heavily in hard seltzer because beer demand is dwindling, their own earnings could similarly reflect the downdraft the seltzer market is experiencing.

Investors likely have a hint for what to expect when Molson Coors reports earnings on Thursday because the brewer has already announced it was ending production of its Coors Hard Seltzer brand a little over a year after its launch. 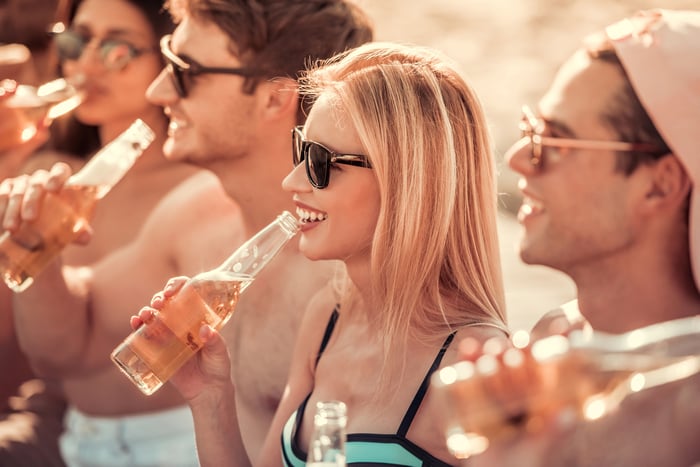 Its professed reason was that it wanted to concentrate on its established Vizzy brand as well as the recently introduced Topo Chico hard seltzer that was developed with Coca-Cola (KO 0.88%). But a growing market would certainly support a third brand, while one that's decelerating quickly would not.

Anheuser-Busch has a similar issue because it flooded the market with hard seltzers across a number of its brands beyond the original Bon & Viv it acquired several years ago (now rebranded as BON V!V). There is also Bud Light Seltzer, BL Lemonade Seltzer, Natty Seltzer, Michelob Ultra Seltzer, and most recently rapper Travis Scott's Cacti brand of hard seltzer.

Earlier this year, A-B also announced it was investing $1 billion over the next few years to build out its supply chain and canning capabilities for hard seltzer. At the time, CEO Michel Doukeris said, "We need to build more seltzer capacity so we can attend the demand from consumers, which is a growing demand."

While the seltzer market is still growing, it's at far, far slower rates than was previously experienced, and there's about to be a shake-out.

A drop of water in the ocean

Yet there's no reason for investors to panic. First, unlike Boston Beer, both Anheuser-Busch and Molson Coors are global beverage giants. While they derive most of their revenue from the U.S., they have substantial far-flung operations around the world, and Molson was already pursuing beverages beyond alcoholic ones.

That's the reason it changed its corporate name from Molson Coors Brewing to Molson Coors Beverage. The decline in beer caused the brewer to reexamine where it wanted to make money, and it didn't want to be limited.

The two companies also have broad product portfolios and both have dipped a toe into the marijuana market with a line of cannabidiol-infused beverages, though that has gained even less traction for them than hard seltzer.

While Boston Beer also has a diversified portfolio of beverages including hard cider, hard tea, kombucha, and a few ancillary beverages, the decline of its Samuel Adams beer forced it to go all-in on hard seltzer, making it far more dependent upon the drink than any other brewer. It was the one company that had the most to lose when the hard seltzer bubble burst.

Yet Molson Coors investors in particular have reasons for hope. During Coca-Cola's earnings conference call with analysts last week, CEO James Quincey said the Topo Chico brand was growing smartly around the world.

He noted the hard seltzer was in 17 markets globally and was expected to be in 28 by the end of the year. It's the No. 2 hard seltzer in Mexico and is No. 1 or No. 2 in terms of growth rates and sales volumes in various European markets. He also said that Topo Chico has gained traction in the U.S. markets that Molson Coors has targeted for the brand (mainly Texas, but also across the South from California to Florida).

Quincey acknowledged, however, that growth in the overall hard seltzer category in the U.S. has contracted significantly, but he said that wasn't unexpected given hard seltzer's popularity in the at-home market rather than in bars and restaurants. Now that people are going out again, a decline was anticipated.

The domestic market is drying up

So there's a good chance that when Molson Coors and Anheuser-Busch report earnings this week, their hard seltzer business will be just as ugly as Boston Beer's report. Yet because of their size and the relatively small contribution hard seltzer makes to their top and bottom lines, the impact won't be nearly as devastating as it was for Boston Beer.

That's not to say beer sales will be any better for them -- that market has been falling for years as well. But seltzer's decline likely won't cripple their earnings the way it did with Boston Beer.

Hard seltzer had a meteoric rise, and while not flaming out, it has quickly reached maturation and saturation in the U.S. Boston Beer is already looking at hard liquor as the next growth opportunity, and we'll likely see these two brewing giants explore new beverage markets as well.