Not even a global pandemic has slowed down hard seltzer's growth trajectory.

Forget being the king of beers, Anheuser-Busch InBev (BUD 0.20%) wants to become the emperor of hard seltzers. The mega brewer announced today it will invest $1 billion over the next two years to upgrade its production facilities to produce more hard seltzer. 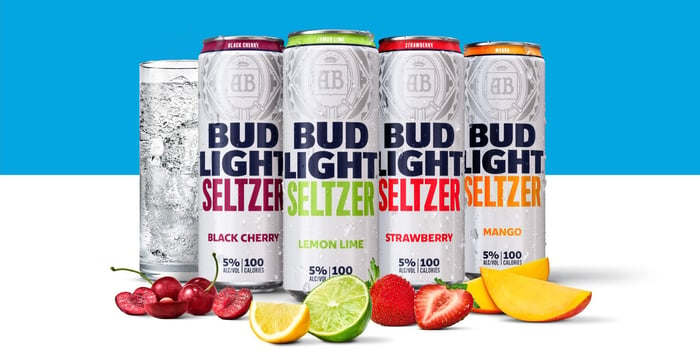 A realm of opportunity

The mega brewer still reigns supreme in beer, accounting for approximately 40% of all sales, followed by MillerCoors at over 20%, and Constellation Brands at 10%.

Yet beer sales were hit hard in 2020 as the COVID-19 pandemic shut off key outlets for consuming beer, namely bars and restaurants, and while there was improvement as the year progressed, it may take some time before volumes reach 2019 levels again.

On the other hand, hard seltzer sales are soaring. Where beer was able to offset some of the on-premise sales through greater sales at packaged goods stores, convenience stores, and the like, consumers kept hard seltzer growing at double-digit rates as it has for the past few years.

Anheuser-Busch already has numerous brands on the market, targeting all price points on the spectrum, but it believes more is better.

"We need to build more seltzer capacity so we can attend the demand from consumers, which is a growing demand," CEO Michel Doukeris told Reuters.

Some of A-B's most popular beer brands now have a hard seltzer attached to them, too, including Bud Light and Michelob, the latter of which Doukeris says requires a "huge" investment. The brewer recently released the first USDA-certified organic hard seltzer, Michelob Ultra Organic Seltzer.