These pizza restaurant companies are still providing a deep dish of gains.

Chowing down on the massive change in fast food trends triggered by the COVID-19 lockdowns, Papa John's International (PZZA -0.69%), Domino's (DPZ -1.80%), and other pizza chains rebounded faster than many restaurant-sector peers.

The business model of pizza chains was already strongly aligned with takeout and delivery, greatly lessening the impact of dining room closures. Now, with the pandemic's early days 18 months behind us, both companies are still racking up profits and seeing their stocks reach new highs.

That raises the question: Which of these two restaurant stocks would make a hotter, fresher addition to your portfolio? 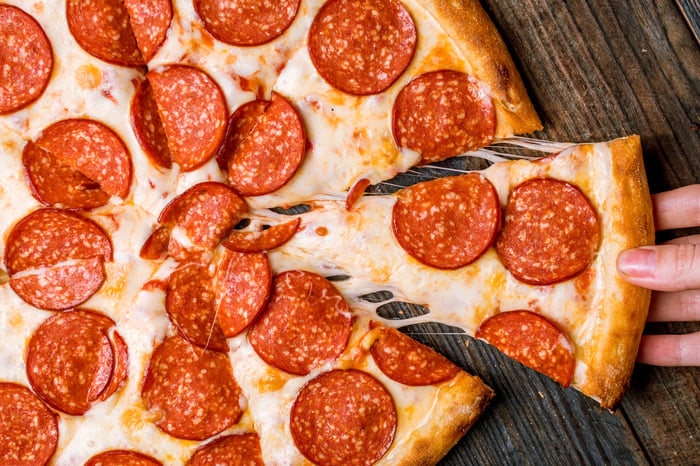 With four consecutive quarters of sales increases higher than 10% to its credit, according to its first-quarter 2021 financial report, Papa John's appears to be experiencing the same tangent of growth as other pizza companies heading into 2021. Its revenue was up 24.9% year over year, to $511.7 million, which, significantly, is also 31.7% higher than its pre-pandemic Q1 2019 revenue of $388.4 million.

Clearly, unlike companies in other sectors such as casinos and cruise lines, Papa John's emerged from the COVID-19 lockdowns without the burden of a crippling mountain of debt. The company also continues paying dividends. Analysts at least one investment bank, Stifel Financial, thinks the chain's stock price still has an approximate 10% to 12% upside, saying in a research note that Papa John's "strength was driven by a combination of continued success with the Epic Stuffed Crust pizza and effective advertising and promotional management." According to Markets Insider, average price targets assigned by seven leading analysts rose by 3.62% over the past three months.

During the May 6 Q1 earnings conference call, executives repeatedly stressed Papa John's metrics are improving solidly "on a two-year basis" and not just as a recovery from the COVID-19 economic lows. During the call, CEO Robert Lynch cited growing use of digital technology (with digital orders now topping 70% of all orders), improved delivery including digitally enabled coordination with third-party delivery services, and popular new menu items such as the aforementioned Epic Stuffed Crust pizza as creating "sustainable long-term comp sales and margin growth."

Given strong revenue and earnings growth in the later quarters of 2020, Lynch expects flat or mildly positive year-over-year increases for the second, third, and fourth quarters of fiscal 2021, but for the company's bullish trajectory to continue longer-term.

Domino's stock price hit a new record high on July 22 following the release of its second-quarter results. The company's revenue popped 17.1% year over year, while its adjusted $3.06 EPS climbed 2.3%. At first glance, these figures appear weaker than Papa John's, but over the past five years, Domino's has outdone its competitor's growth by a factor of more than four.

Early to embrace the digital selling model, and famously described as "an e-commerce company that sells pizza" in a 2015 statement by then VP of multimedia marketing Dennis Maloney, Domino's uses technology to constantly find new ways to improve efficiency. The latest in a long series of improvements is a two-minute "carside delivery" guarantee complete with an over/under betting pool for customers on actual delivery time, managed by DraftKings.

The company's relentless focus on technological and operational effectiveness stands out strongly in its metrics. This has enabled the enterprise to rack up an unbroken string of same-store sales growing for 41 quarters in the U.S., and 110 consecutive quarters internationally. Same-store sales are a key indicator for Domino's given its 98% franchised model and 5.5% royalty on all sales, which means the costs of running each location are borne by the franchisee, and margins on the operations there aren't important to Domino's profitability, only the growth in sales on which it receives its royalty.

With its franchise model's profitability, increasing the number of locations is important to Domino's future growth. The enterprise opened a net 238 new restaurants during Q2, over 200 of them in the international market where same-store sales are also growing fastest. Highlighting the size of its network, it opened its 18,000th store in La Junta, Colorado, on July 15. 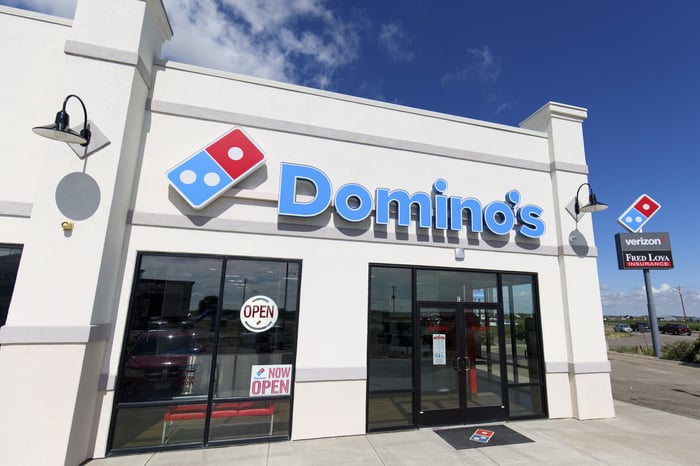 The company's front-running position in the pizza market is also highlighted by some data from its Jan. 12 presentation at the ICR Conference. In this presentation, it claimed to be the leading fast-food pizza company on Earth, citing its 17% worldwide market share, 22% U.S. market share, 36% share of the U.S. pizza delivery market, and potential to add a minimum of 5,100 more restaurants in just its top 15 national markets.

Papa John's results for the most recent few quarters are very good, but Domino's seems to be operating at another level entirely. Its e-commerce approach, far-flung network, and highly profitable growth model of franchises and royalties driven by consistent long-term same-store growth arguably make it something of the "Amazon of pizza fast food companies," with the strong market power and reliably increasing financial strength across time.

The pick of the pizza parlors

While some might argue that the performance of fast-casual pizza chain stocks will level off as COVID-19 lockdowns end, their strong momentum going into 2021 and the possibility of additional government lockdowns in response to a recent uptick in coronavirus cases suggest the tailwinds these stocks have benefitted from are not over just yet. The new vigor of these companies may well continue past the pandemic, with convenience, a robust existing delivery model and network, and the enthusiastic reception of new menu items raising these stocks to new heights.

While Papa John's future prospects look moderately bullish, Domino's still dominates and it is my choice between the two restaurant stocks. Papa John's stock has been underperforming the S&P 500 for more than a decade, though it has closed the gap somewhat lately. On the other hand, Domino's stock has outperformed the index since the summer of 2010, except for a few brief periods when performance was comparable. As of July 21, the S&P 500 gained 101.4% over the past five years, while Domino's stock price grew 264.8% during the same period. Papa John's stock grew 58.8% over the half-decade in question.

Papa John's performance is decent, but Domino's is outstanding. On the surface, Papa John's growth figures appear to be outstripping its rival's, but from a big-picture perspective, that's because it has so much catching up to do. Neither is a bad investment, but Domino's track record, business model, and sheer scale make it the winner.