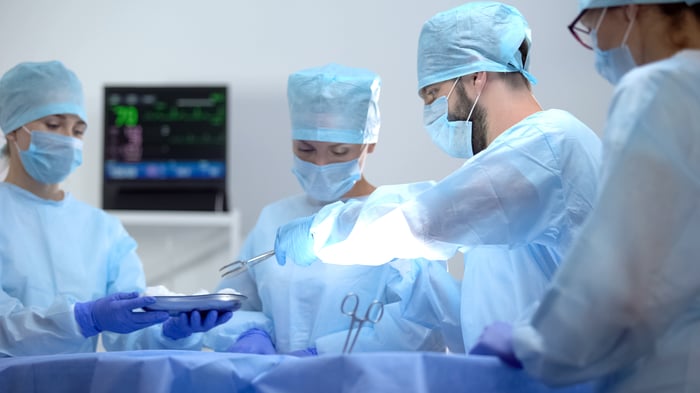 As the Hugo RAS system works toward regulatory approval in the U.S. and Europe, investors are wondering what, if any, impact this could have on Medtronic's overall revenue several years down the line.

Before we begin to make assumptions about the long-term impact of Medtronic's surgical robotics efforts on the overall business, it would be helpful to examine the market at large.

The benefit of surgical robots is that they offer a minimally invasive alternative that provides surgeons "improved visualization, greater dexterity, and ergonomic advantages," according to Medtronic, often leading to improved surgical outcomes.

However, such robots are used in less than 3% of surgeries globally. Medtronic believes that many hospitals have been deterred by the cost barriers; in the meantime, the surgical robotics market is far from reaching its maturity.

Citing "growing adoption and acceptance of minimally invasive surgeries" and "the introduction of cost-effective and flexible surgical robots by the new market players," Grand View Research estimates the market is growing at a 21.6% annual rate, to expand from $2.3 billion in revenue in 2020 to $14 billion by 2028.

Another significant factor is a rise in the share of the global population over the age of 65 (those who most often need surgical interventions) -- a recent United Nations report projects that the number of people in this group will steadily rise from 1 in 11 in 2019 to 1 in 6 by 2050.

Based on this data, we can assume that the surgical robotics market remains in the early innings of its growth story.

Given the promising future of this industry, it should come as no surprise that Medtronic is determined to grab as much market share as possible to create value for its shareholders.

Medtronic's chairman and CEO Geoff Martha noted in the company's fourth-quarter 2021 earnings call transcript that the company had taken its first major step in establishing itself as a player in the industry, realizing its "first revenue from Hugo placements outside the U.S. in Q4," which will "collect clinical data to support regulatory approvals in the U.S. and around the world."

Martha went on to indicate that the company anticipates revenue from its surgical robotics business will be "$50 million to $100 million in [the current fiscal year that runs through April 30, 2022], and that's likely to roughly double or triple in FY '23," which seem to be reasonable forecasts considering both the growth potential of the market and the company's significant resources that could aid it in gaining market share.

Factoring in a 7% market share for Medtronic in the surgical robotics industry by 2028 (arguably doable for a company with $3.6 billion in cash at its disposal), the company's revenue from these endeavors would soar from a negligible amount in fiscal 2021 to $1 billion by the end of fiscal 2028 and the beginning of fiscal 2029.

Surgical robotics is one of many growth paths

The Hugo RAS System is one of many products expected to drive future growth for Medtronic, including the upcoming launch of the Symplicity Spyral Renal Denervation system. It "delivers energy to the nerves leading to the kidney," helping to regulate blood pressure, according to Medtronic. In addition, Medtronic is anticipating is a launch of Vital Sync, which is a software platform "that provides clinicians with the right information, at the right time" to improve patient outcomes, according to Medtronic. The third product that Medtronic expects to launch in the future is the Synergy continuous glucose monitor system.

This business is positioned for solid growth in the years ahead. A very safe 2% dividend yield -- higher than the S&P 500's current average of about 1.3% -- with the potential for mid-single-digit annual revenue growth and upper-single-digit adjusted earnings per share (EPS) growth all make Medtronic a position worth considering for long-term investors at less than $130 a share.