The stock market did well on Thursday, but some choppy waters could lie ahead.

The stock market moved higher on Thursday, with investors seeing the bright side of earnings season. Gains were sharpest for the Dow Jones Industrial Average (^DJI -0.53%), but the S&P 500 (^GSPC -0.72%) was only a little bit behind while the Nasdaq Composite (^IXIC -0.70%) came up with the smallest gains.

Shares of Amazon.com were down about 1% in the regular session. However, the stock fell more than 5% after hours following its release of second-quarter financial results.

At first glance, Amazon's numbers seemed quite healthy. Net sales jumped 27% during the quarter to $113.1 billion. Net income soared by roughly 50% year over year to $7.8 billion, working out to $15.12 per share. The company reported 250 million items purchased during the latest Prime Day event, easily eclipsing results from previous years. 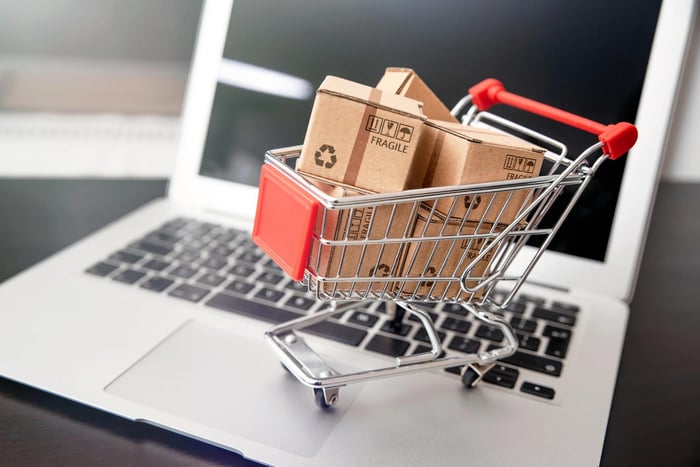 Yet investors didn't seem satisfied by the extent of Amazon's gains, and they absolutely didn't like the guidance the company gave for the third quarter. Amazon projected revenue of $106 billion to $112 billion for the third quarter, which would represent a sequential decline and a year-over-year gain of just 10% to 16%.

Some have feared that Amazon would suffer when the economy reopened, and that seems to be consistent with what the company itself is projecting. That said, Amazon has defied naysayers before, so it's too early to count on the e-commerce giant just yet.

Meanwhile, shares of Pinterest took a double-hit on Thursday. After falling 6% in the regular session, the social media company's stock saw an even bigger 16% drop after hours.

Again, Pinterest's numbers generally looked stellar on their face. Revenue soared 125% year over year to  $613 million. The company reversed a year-ago loss with adjusted net income of $170 million, working out to $0.25 per share. Although user growth slowed to just 9%, average revenue per user was sharply higher, doubling both in the U.S. and internationally.

Yet Pinterest also cited an uncertain future in its guidance. The social media company believes revenue growth will slow to about 40% in the third quarter, and it said that reduced user growth has continued in July. U.S. monthly active user counts actually fell in the second quarter, and those declines accelerated in July.

Investors had high expectations for Pinterest coming into the quarterly report, so it's not terribly surprising to see the stock pull back after releasing results that weren't able to get over a high bar. What's important going forward is that Pinterest continue to attract new users and then monetize them more effectively to keep revenue and profits moving higher.

Amazon Falls, but This Long-Struggling Nasdaq Stock Is on the Mend

What Recession? 5 Stocks Leading the Nasdaq to Its Best Month Since 2020
356%