The company is cemented as the industry leader, but a crack is showing.

Active investing means different things for different people. Some watch their portfolios like hawks, reading conference calls and dissecting financial statements. Others simply buy and hold shares in companies they believe are well managed and forget about them.

Whichever path they took, shareholders of Illumina (ILMN 1.27%) have been handsomely rewarded over the long term. The company has delivered 10-year and 20-year returns of 720% and 8,390%, respectively.

But that past success is no guarantee for the future. Here are three things that investors should know about the company right now. 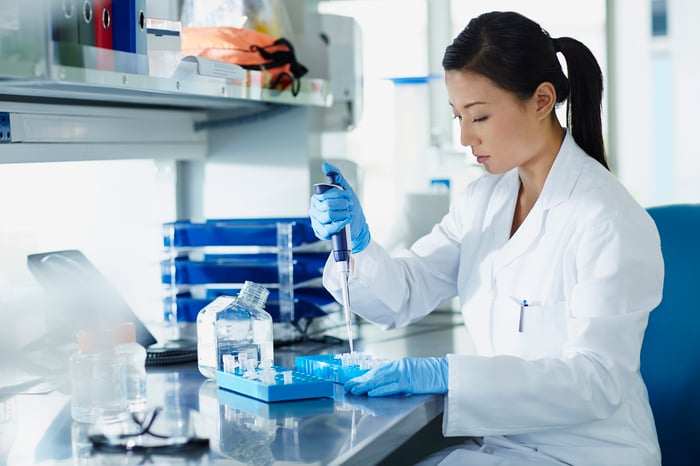 1. It has a dominant market position

The Federal Trade Commission has said Illumina controls roughly 90% of the market for sequencing machines in the U.S. Management estimates that it compiles 80% of the world's genomic information each year.

Some have likened the company to Alphabet's Google because of its dominant market share and its products' ability to search the human genome. It's been that way since it acquired the sequencing technology from Solexa in 2007.

Illumina employs a razor and blade model -- selling the razor at less profit so customers buy the high-margin blades for the life of the product. For Illumina, its razors are the sequencing and scanning instruments. It has a variety to meet different customer specifications like processing speed and data capacity.

The blades are the consumables -- items like reagents, flow cells, and microarrays. These have become a larger percentage of the company's sales over time. Like most companies selling equipment, services also make up a significant portion of revenue.

As the cost of sequencing has come down, it has opened the technology up to a wide array of customers. Illumina now counts academic institutions, pharmaceutical and biotech companies, government laboratories, and consumer genomics companies as clients. That list is likely to grow as the cost continues to decline.

2. The field of genomics is still young

Harvard geneticist George Church summed up the progress in genome sequencing well when he said, "sequencing is 10 million times cheaper and 100,000 times higher quality than it was just a few years ago." Decoding the genome has dropped from about $50,000 just 10 years ago to roughly $600 now.

Illumina is on a mission to make that $100. As the price falls, more and more applications of the technology become cost-effective. That would be true even if genomics hadn't been thrust into the spotlight over the past 18 months.

The pandemic has renewed interest in scientific discovery and increased the appreciation of gene-based medicine. Management confirmed the trend, stating they're seeing more patients, physicians, and researchers access the company's applications than ever before. Intellia Therapeutics' recent breakthrough in editing genes inside the human body is likely to accelerate the pace of investment.

Sequencing involves taking fragments of DNA, determining the order of the chemical building blocks, and then assembling the entire genome using areas of overlap. It's like putting a puzzle together where the edges of each piece show some of the adjoining piece. You can match up those edges and eventually make out the entire picture.

It's why sequence length is important. That refers to how many base pairs of a DNA fragment are sequenced. It's easier to put the puzzle together if the pieces have more area where they overlap.

Illumina's short-read sequencing has been the standard for years because it was cheaper and more accurate. But it left areas of the human genome unable to be mapped.

After more than a decade of struggles, Pacific Biosciences of California (PACB 3.07%) -- PacBio for short -- has developed a technology that's making the long-read approach competitive. In June, the company's HiFi sequencing helped researchers fill in the missing 8% of the human genome.

It's that type of progress that led Cathie Wood's ARK Investment Management to sell all of its shares of Illumina in favor of PacBio. It had previously called the stock the "cornerstone of our genomics revolution theme." It's also why Illumina tried to buy PacBio in 2018, and why regulators thwarted the bid in early 2020.

It isn't an existential threat -- the market for long-read sequencing is estimated at less than one-tenth that of short-read -- but it's growing twice as fast. If the industry leader plans to maintain its dominance, it'll need to come up with a new strategy in the years ahead.