Please ensure Javascript is enabled for purposes of website accessibility
Log In Help Join The Motley Fool
Free Article Join Over 1 Million Premium Members And Get More In-Depth Stock Guidance and Research
By Keith Speights – Jul 30, 2021 at 5:52AM

There are certainly reasons to think the biotech stock is overpriced right now.

Move over, Murphy's law. Everything that could go right for Moderna (MRNA -0.23%) seems to be going right. The company was added to the S&P 500 index. Sales of its COVID-19 vaccine are booming, and its share price has more than tripled so far this year.

However, all of this success could have some investors wondering just how long the momentum will last. And sometimes, when a good run ends, it isn't a pretty picture. Could a meltdown be on the way for Moderna stock? 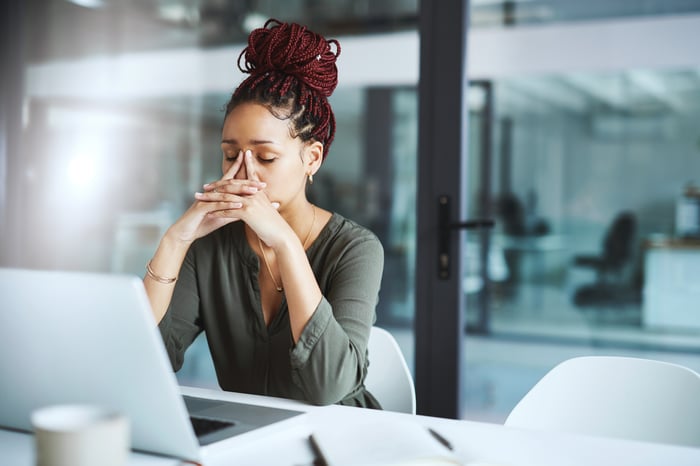 There's no question that Moderna's valuation has reached lofty heights of late. The vaccine-maker's market cap is close to $130 billion, making Moderna one of the biggest biotech stocks on the market.

Let's put that market cap in perspective. Moderna has one product on the market, compared to a multitude of products for Pfizer. Moderna's projected sales this year are only a fraction of what Pfizer will likely make. The company's pipeline looks tiny versus Pfizer's, and yet Moderna is now valued at more than half of Pfizer's market cap.

Moderna's valuation probably wouldn't be very concerning if the company could count on the revenue that it will make in 2021 and 2022 continuing over the long run. However, there's considerable uncertainty as to whether or not that will be the case.

No one knows for sure how long Moderna's COVID-19 vaccine will provide protection against infection. The longer the duration of immunity, the fewer vaccine doses that the company will sell.

Perhaps emerging coronavirus variants could force the need for booster doses. For now, though, Moderna's vaccine appears to be holding up relatively well against variants, especially in preventing severe cases of COVID-19.

Remember, too, that Moderna's vaccine currently requires two doses. Even if booster shots are needed going forward, it's probable that only single shots will be used.

This lower volume will negatively impact Moderna's future revenue unless the company doubles its price per dose. If Moderna took that option, though, it could set the stage for rivals to capture more market share.

A meltdown in the making?

A sky-high valuation plus serious questions about the future could add up to a meltdown in the making for many stocks. Will that happen with Moderna? Maybe.

I've been bullish about Moderna for a long time. However, even I don't think it's worth more than half the market cap of Pfizer and more than Regeneron and Vertex combined.

Still, though, I don't predict a meltdown for Moderna stock. Yes, I fully expect the biotech's shares will fall from current levels. However, my take is that there'll be more of a gradual decline instead of a crash.

There's a real possibility that the current worries about the delta variant fade away. As those concerns decrease, so could Moderna's share price. But that's more likely to happen over a period of months instead of on a super-quick basis.

Even if Moderna stock falls, as I think it eventually will, my view of the company's long-term prospects remains upbeat. I look for Moderna to crank out more successful messenger RNA (mRNA) vaccines and therapies over the next decade and beyond.

The company won't be able to avoid Murphy's law forever. However, I anticipate that more will go right for Moderna over the long run than will go wrong.