Markets were mixed on Tuesday, but one notable stalwart took a big hit to its share price.

Investors have been on edge lately, and it showed in Tuesday morning's stock market action. Wall Street clawed back some of its early losses, but major indexes remained mixed as market participants tried to balance worries about the pandemic against signs of continuing economic growth. As of 11:30 a.m. EDT today, the Dow Jones Industrial Average (^DJI 0.01%) was up 58 points to 34,897. However, the S&P 500 (^GSPC -0.16%) had eased lower by 3 points to 4,384, and the Nasdaq Composite (^IXIC) fell 89 points to 14,592.

In times of uncertainty, many investors turn to defensive stocks in areas like consumer staples. But with large numbers of shareholders all seeking the same protection against a stock market crash, valuations on defensive stocks can rise to a point at which they're just as vulnerable to disappointments as any other stock.

That's what investors in Clorox (CLX -1.07%) found out today, and it's a good warning for any investors who are overly reliant on the purportedly crash-proof reputation that defensive stocks have.

Shares of Clorox were lower by more than 11% Tuesday morning. The maker of bleach and other household cleaning products wasn't able to reassure its investors that it will be able to sustain the massive growth it has enjoyed over the past year. 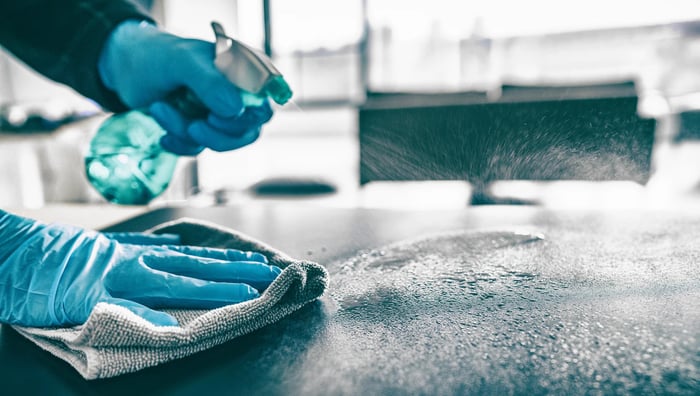 Clorox saw pressure across its business. The health and wellness segment suffered a 17% sales decrease, while lifestyle product sales dropped 3%. The bright spot was a 5% rise in international revenue, although segment sales would have declined were it not for an acquisition.

The company blamed the downturn largely on decelerated demand for products compared to the worst parts of the pandemic. Clorox emphasized that when you go back two years to try to take out the pandemic's impact, sales were up 13% over the longer period. Nevertheless, higher commodity costs wiped out savings from company efficiency efforts, weighing on the bottom line.

Even worse, Clorox expects tough times to continue. It projected a 2% to 6% drop in revenue for fiscal 2022, with adjusted EPS of $5.40 to $5.70 for the full year representing a decrease of more than 20% from the just-ended 2021 fiscal year. Higher commodity costs are seen continuing, dealing a blow of about 3 to 4 percentage points to gross margin.

The price of protection

With today's drop, shares of Clorox are now down by nearly a third from their highest levels about a year ago. That's a massive decline, especially given that the broader market has actually performed quite well over the same period.

Yet when you look at longer-term trends, you can see the heights to which defensive investors were willing to bid up Clorox's stock. In just eight months in late 2019 and early 2020, shares soared almost 60%, lifted largely on hopes that the stock would help provide protection from a bear market. To be fair, that strategy was successful in avoiding the downturn in stocks in February and March of 2020, but as it turned out, declines got pushed forward rather than being eliminated completely.

No stock is a sure thing, and even companies with reputations for being smart defensive plays aren't always effective. Clorox's losses today show that even stocks that appear safe can see big losses, and investors have to be prepared for whatever may come -- including a crash in which Clorox and other defensive stocks drop along with the overall market.

Why Procter & Gamble Will Move the Dow Tomorrow