Please ensure Javascript is enabled for purposes of website accessibility
Log In Help Join The Motley Fool
Free Article Join Over 1 Million Premium Members And Get More In-Depth Stock Guidance and Research
By Demitri Kalogeropoulos – Aug 4, 2021 at 6:44AM

The coffee titan is back to setting sales records.

Starbucks (SBUX) is in the middle of an epic growth rebound. Sure, soaring sales in recent months can be traced to collapsing demand in the year-ago period when social distancing was at its peak around the world.

But the coffee titan still notched new fiscal third-quarter records on strength in the U.S. and international markets like China. Executives also lifted their outlook due to what they described as "powerful momentum" heading into the final quarter of fiscal 2021.

Let's look at a few of those powerful rebound numbers. 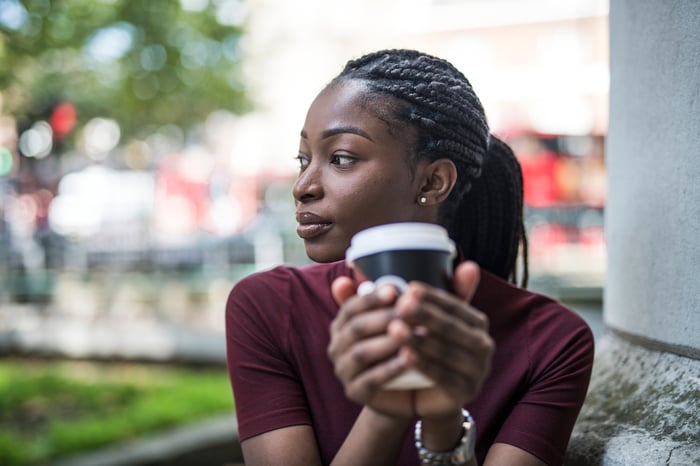 The 78% year-over-year revenue spike doesn't tell investors much because sales were decimated a year ago by store closures. But the growth rebound is real.

Revenue is up 10% in the core U.S. market when compared to 2019, meaning Starbucks is back to setting records. "Starbucks delivered record performance in the third quarter," CEO Kevin Johnson said in a press release, "demonstrating powerful momentum beyond recovery."

Starbucks is staying aggressive on store launches, with 352 locations added this quarter. Most of those additions came in its two biggest markets, the U.S. and China. The company is on pace to add 600 locations in China this year, accounting for more than half of its global total.

The earnings rebound was dramatic, with operating margin jumping to 20% of sales, compared to an operating loss of 17% of sales a year ago. That recovery puts Starbucks on track to improve on its pre-pandemic margins despite rising costs for inputs and labor. These pressures are being more than offset by higher prices and a tilt in demand toward premium coffee products. 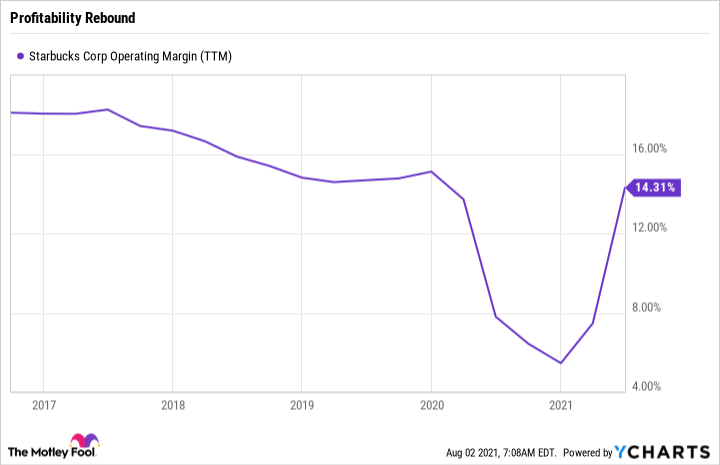 Starbucks lifted its margin outlook and now sees the 2021 figure landing at 17%, up from the prior forecast range of between 15% and 16%.

Starbucks now counts over 24 million active members of its loyalty program, up 48% from last year. These coffee fans are highly engaged, tend to spend more per visit, and give the chain a huge base of people it can market new releases toward.

The growth on this score suggests Starbucks is cementing its leadership status in the premium coffee niche. "Our ability to move with speed and agility and to be out in front of shifting customer behaviors has helped further differentiate Starbucks," Johnson said.

Starbucks lowered its outlook in a few international markets, but the U.S. rebound is going strong enough to power an upgraded global sales forecast. Revenue should now land at between $29.1 billion and $29.3 billion, compared to the prior range of $28.5 billion to $29.3 billion.

Earnings got a bigger boost thanks to those rising margins. Non-GAAP profit per share is headed to as high as $3.25 this year, compared to the previous $3 target.

Overall, investors have plenty to like about Starbucks' latest momentum. While COVID-19 challenges will impact the business until at least early 2022, the chain is setting new global growth records and has a clear path toward higher profitability well past the pandemic.