Please ensure Javascript is enabled for purposes of website accessibility
Log In Help Join The Motley Fool
Free Article Join Over 1 Million Premium Members And Get More In-Depth Stock Guidance and Research
By Kody Kester – Aug 4, 2021 at 6:12AM

The FDA recently approved Ultomiris as a treatment for paroxysmal nocturnal hemoglobinuria patients who are under 18, and it should get a similar label expansion in the E.U. soon.

In mid-July, AstraZeneca (AZN -0.20%) completed its $39 billion acquisition of Alexion Pharmaceuticals. And this week, that purchase likely became a little more valuable thanks to a recommendation from the European Medicines Agency's Committee for Medicinal Products for Human Use.

The committee has recommended that the European Union's health regulator expand its approval of blockbuster drug Ultomiris to include the treatment of paroxysmal nocturnal hemoglobinuria (PNH) in children and adolescents. The U.S. FDA approved a similar label expansion in June. While the actual approval hasn't happened yet, this is exciting news. 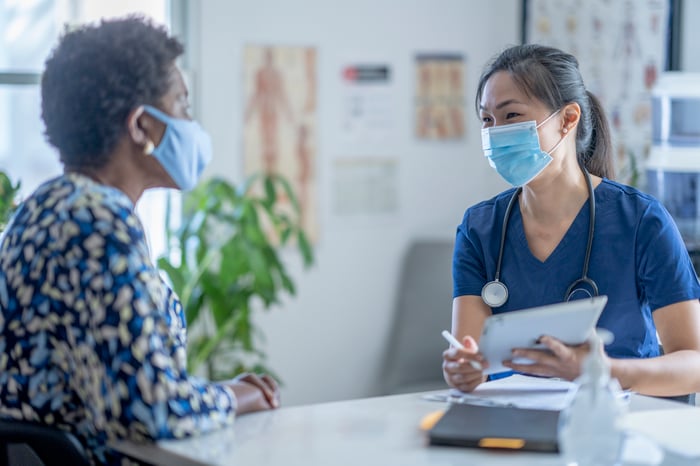 Ultomiris is used to treat PNH and atypical hemolytic uremic syndrome (aHUS) -- both of which are extremely rare, debilitating, and potentially life-threatening blood diseases. Alexion reported $347 million in net revenue from sales of Ultomiris during the first quarter. That represented 10.5% sequential growth from its $314 million in sales in Q4 2020, and 55.6% year-over-year growth from its $223 million in Q1 2020 sales.

The treatment won its first approval from the FDA for use in adult PNH patients in December 2018; by 2020, its annual sales had hit $1.08 billion, officially making it a blockbuster drug.

This impressive statistic speaks to the drug's potential, and in fact, its already respectable first-year sales of $339 million for 2019 had essentially tripled by 2020 to the aforementioned $1.08 billion figure. Put another way, Ultomiris was responsible for just over two-thirds or 68% of Alexion Pharmaceuticals' sales growth, from $4.99 billion in 2019 to $6.07 billion in 2020.

Last month's U.S. label expansion -- and the likely soon-to-arrive expansion in Europe -- should give a noticeable boost to AstraZeneca. Approximately 10% of the estimated 5,000 patients with PNH in the U.S. are under 18, per MedScape. That translates into potentially hundreds of additional patients who could be treated with the drug at an estimated average annual price of $458,000 each.

Given that it's the only approved treatment for patients in the under-18 demographic, Ultomiris should capture a large fraction of that market.

Meanwhile, the European Medicines Agency estimates there are 4,000 PNH patients in the EU. Assuming that 10% of them are under 18, the anticipated label expansion there should translate into several hundred more patients in that market for Ultomiris.

Even with price negotiations from various entities such as governments and health insurers to reduce the average annual price, those sales should add several hundred million dollars to AstraZeneca's top line by next year -- a respectable boost to the company's revenues, which in 2020 totaled $26.6 billion.

Although Ultomiris will cannibalize sales of its more expensive peer Soliris (which has an average annual price of $500,000 per patient) as PNH and aHUS patients make the switch for cost savings and to reduce the frequency of treatment from every two weeks to every eight weeks, it doesn't appear as though this is having a particularly negative impact on Soliris yet. The drug's sales still managed to edge 0.5% higher year over year, from $1.02 billion in Q1 2020 to $1.03 billion in Q1 2021.

These are just three of the 10 launches that Alexion is expecting by 2023, which Alexion anticipates will help the company's standalone revenue advance from $6 billion in 2020 to $9 billion to $10 billion by 2025.

It's early, but AstraZeneca's acquisition appears to be paying off

Although it will take a few years to determine whether AstraZeneca's acquisition of Alexion Pharmaceuticals was a smart move, the early signs are encouraging.

Based on the previous sales trends, and factoring in both the approved label expansion for Ultomiris in the U.S. and the assumption that the EMA will follow its committee's recommendation to do the same in the EU, I would forecast that Ultomiris' annual sales will top $2 billion as soon as next year.