Shares of the data analytics specialist dropped on another disappointing earnings report.

Shares of Alteryx (AYX 2.79%) were taking a dive today after the data analytics company once again offered up a disappointing earnings report. This time, guidance seemed to be the culprit as the company forecast a much wider loss than expected for the second half of the year. 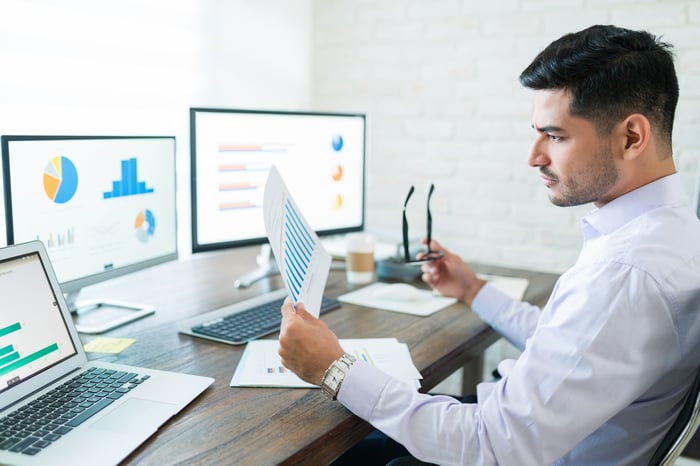 Alteryx beat estimates with its second-quarter earnings report. Revenue rose 25% in the quarter to $120.1 million, which was ahead of the consensus at $113 million, and annual recurring revenue was up 27% to $547.6 million.

On the bottom line, the company's adjusted loss per share came in at $0.08, compared to a $0.02 profit a year ago as spending on sales, marketing, and general and administrative expenses jumped, showing the company is investing in its turnaround plan. Still, that result was better than expectations of a per-share loss of $0.25.

"Alteryx continues to make meaningful progress on our transformation journey as evidenced by our ARR growth of 27% this quarter," CEO Mark Anderson said. "We also see significant momentum with our go-to-market strategy under our new Chief Revenue Officer, Paula Hansen."

What really sank the stock was the company's guidance. For the current quarter, management called for revenue of $121 million to $124 million, representing just 3% year-over-year growth at the midpoint and well below estimates at $147 million. On the bottom line, it forecast a loss per share of $0.18 to $0.21, which was much worse than the consensus at a per-share profit of $0.03. Full-year guidance was similarly discouraging.

Alteryx has struggled throughout the pandemic as its once high-flying revenue growth has ground to a halt and founder Dean Stoecker suddenly stepped down as CEO last year. While the stock does have the potential to bounce back, it's easy to see why investors were disappointed with the numbers out from the tech company last night.

This Tech Stock Continues to Tumble Despite Rising Revenue. Is It Time to Buy?
401%