Their stocks are rising after hours on Thursday.

Earnings continued to flood in on Wall Street, and investors were pleased about what they saw. By the end of the day, the Dow Jones Industrial Average (^DJI 0.45%), S&P 500 (^GSPC -0.03%), and Nasdaq Composite (^IXIC -0.52%) were all sharply higher, with all but the Dow managing to set new all-time records.

Indeed, positive earnings reports kept coming in after the market closed on Thursday, suggesting that there could be even bigger gains for stocks on Friday. Among the best performers after hours were Carvana (CVNA -1.85%) and Monster Beverage (MNST -0.54%), as investors seemed quite pleased with everything they saw from growth stocks both new and old.

Shares of Carvana added to their 2% gains in the regular session, rising another 9% in the after-hours session. The e-commerce auto seller posted exceptionally strong second-quarter results that included a new milestone for the company.

The highlight for Carvana was that it was profitable for the first time in its history. Net income came in at $45 million, working out to earnings of $0.26 per share. Revenue nearly tripled year over year, and retail units sold almost doubled to more than 107,800. The company took full advantage of extremely favorable conditions in the vehicle market, with gross profit per unit soaring by nearly $2,400 to $5,120 per vehicle. 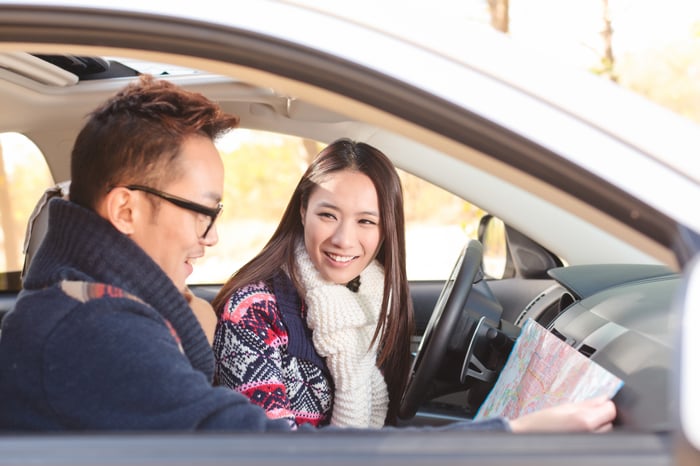 Carvana sees the good times continuing. The company predicted that in the second half of 2021, demand should remain at heightened levels, saying outright that the upper limit would be its own operational capacity to make sales. Carvana will make investments to keep up with current demand and anticipate growth in 2022 and subsequent years.

Inventory availability has been extremely limited as used car prices soar, but Carvana is doing as good a job as it can to manage those challenges while capitalizing on its extraordinary opportunity. Investors can expect more and better things ahead from Carvana for the rest of 2021 and beyond.

Also rising after hours were shares of Monster Beverage. The energy drink pioneer's stock got a 2% boost after reporting its second-quarter results.

Monster had record second-quarter sales during the period, rising almost 34% to $1.46 billion. Net income jumped 30% to $404 million, and earnings of $0.75 per share came in stronger than the $0.68 per share consensus forecast among those following the beverage stock. Gains came from both Monster's own legacy energy drink lines and from the brands that it acquired from Coca-Cola (KO 0.10%) several years ago.

Monster did report some challenges, though. A shortage of aluminum cans has been just one of the supply chain issues that many companies are facing, but Monster said that it's been able to secure enough cans to meet demand. However, the company warned that a shortage of shipping containers could make it difficult for those imported cans to arrive on time, and the result could be higher operating costs or even lost sales.

Monster has been one of the biggest winners of the 21st century, but it has faced competition from rising players in the beverage business. It's good to see that the old guard is still able to post solid results even as innovation brings new ideas to a mature industry.