The global energy industry is huge, and green energy alone is now worth more than $1 trillion worldwide. But while oil companies are worth hundreds of billions on the stock market, the only major space for renewable energy investors has been electric vehicles. Energy storage company Stem (NYSE:STEM) recently went public via SPAC, and here are three reasons why investors could benefit from learning about this green energy newcomer.

Green energy is efficient but imperfect

Fossil fuels have powered the global economy for many years, going back to the discovery of oil in the 1800s. After a long run of dominance, climate change concerns and innovation have resulted in the emergence of renewable energy sources such as wind and solar power.

Just over a quarter of the world's energy came from renewable sources in 2018, and that figure is estimated to rise to more than 45% by 2040. The cost of renewable energy has continually decreased over time, making it more competitive with fossil fuels. According to the National Renewable Energy Laboratory, electricity from fossil fuels currently costs between $0.05-$0.17 per kilowatt-hour. Electricity from solar now costs between $0.03-$0.06 per kilowatt-hour. 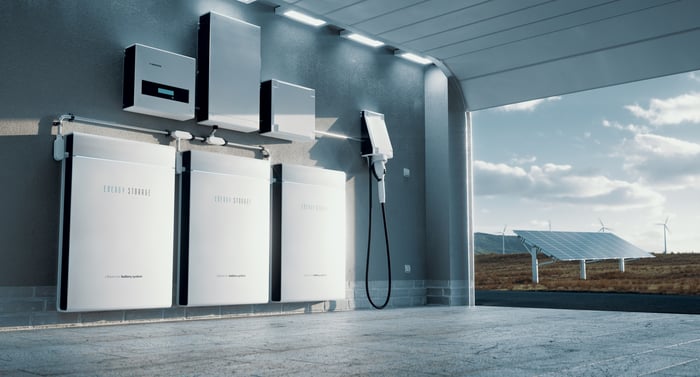 Renewable energy is more cost efficient, but there are still flaws related to the existing electrical grid. Renewable energy production isn't always available, such as during nighttime or bad weather when the sun doesn't shine; this is called intermittence, and it makes it difficult for many companies to rely on green energy.

Stem provides smart energy storage systems that help companies efficiently utilize electricity. The company resells batteries and other hardware from suppliers like Tesla Motors, Panasonic, Samsung, and LG Electronics. It then overlays its own proprietary software on top of it called Athena, an artificial intelligence program.

Athena works across a company's electric grid to efficiently use energy and battery storage in real time. Its AI will look at energy prices, time of day, and other factors to determine when to charge its batteries and draw power from them. Athena will learn a customer's usage patterns over time and show typical customers 10% to 30% savings on monthly energy costs.

This can be huge cost savings for large companies that use enormous amounts of electricity. Stem works with more than 30 Fortune 500 companies, including Amazon, Walmart, and Facebook, and more than 950 customers in total.

Stem is just getting started; its 2020 revenue was just $36 million but is expected to grow rapidly. The company is forecasting 348% revenue growth this year, to $147 million. Management expects the business to turn free cash flow positive in 2023 and cross $1 billion in revenue in 2026.

The company has $500 million in cash on its balance sheet to fund expansion plans. It plans to operate globally to take advantage of a rapidly growing market for energy storage that could reach $1.2 trillion in value by 2040.

In its early years, hardware sales will generate much of Stem's near-term revenue. Because it sources this hardware from suppliers, its margins are lower but should rise over time as software revenue begins to contribute more. Gross margins on hardware run 10%-30%, while software margins are at 80%. Stem expects an overall long-term gross margin of 40%.

Is Stem a buy?

Stem claims the status of the only pure-play green energy storage company on the public market. It's a first mover, but that doesn't mean that there isn't risk involved. The company's relationship with battery manufacturers means that Stem doesn't need to lay out the capital for manufacturing, but Stem does need these suppliers as a result. If Tesla, for example, decided to develop its own AI system for its batteries, it could cut out Stem and become a competitor.

The stock has just a $3.5 billion market cap, so there is a lot of room for growth when considering a potential $1.2 trillion addressable market. A lucrative market could attract competition, so investors will want to keep an eye on the relationships that Stem develops with both customers and suppliers, Stem's contract backlog, and how the company performs against its guidance.

This is a very early stage company and a stock that will likely need time to pay off for investors. But if Stem executes well, its future could be electrifying.