Its vaccine candidate might be too far behind to matter.

The race to be the first to make a coronavirus vaccine is over, but that doesn't mean the competition has ended. Inovio Pharmaceuticals (INO 2.07%) wasn't exactly a contender for the top spot during the vaccine-development scramble in 2020. Its candidate, INO-4800, will only start its phase 3 clinical trials sometime this summer.

But now, the rise of the delta variant might be threatening the effectiveness of its flagship project, which was designed to combat the original version of the virus. If Inovio's jab doesn't cut the mustard, it might not even get approved. On the other hand, there's reason to believe that success against the delta variant won't guarantee a higher stock price. Let's investigate a bit further to see why that might be the case. 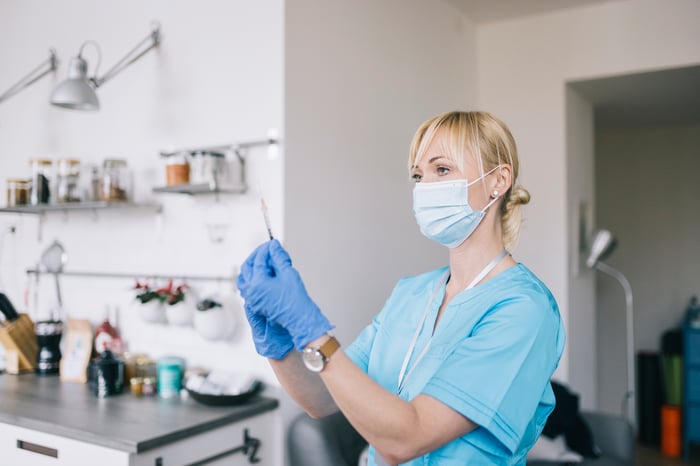 The troubling fact for investors is that, so far, there's no data on INO-4800's effectiveness against the delta variant specifically. Nonetheless, there are a few early tidbits that might support an optimistic assessment.

In April, Inovio reported that its vaccine candidate was effective against several of the variants circulating at the time, all of which were more infectious than the original virus. Importantly, the jab reportedly elicited "similar levels of neutralizing activity" against the variants as it did against the initial version of the virus. That's a good start, but it's hardly enough to juice the stock's price, especially considering that the delta variant wasn't widely circulating earlier in the year. It's unclear when more data will be available.

However, there is another Inovio project that also seems as if it could be heading in the right direction.  In May, the company released preclinical data suggesting that its INO-4802 vaccine candidate, intended specifically to counter all viral variants of coronavirus, works against two of the older variants. Preclinical testing is ongoing, and it's likely that the vaccine will soon be tested against the delta variant specifically. If eventual data from clinical trials matches Inovio's ambitions for a pan-COVID vaccine, INO-4802 could be a bigger winner than INO-4800. But it's also much further behind in the development process, so it probably won't be very useful against the delta variant.

The biggest issue with INO-4800 is that it will arrive very late to the market, assuming it is effective against the delta variant and passes through its phase 3 clinical trial at all.

Powerful competitors like Moderna, Pfizer, and Johnson & Johnson have been selling their versions for months already. While it's possible these vaccines may be less effective against the delta variant, the businesses already have plans in motion to deliver additional doses and develop variant-specific booster shots to make up for these shortcomings. The chances are high that these projects will be out the door before the first version of INO-4800.

That's important, because these companies have already sold enough doses for some developed countries to vaccinate the majority of their populations. And their plan is to sell even more doses next year. If Inovio's vaccine isn't ready quite soon, it might find a fully saturated market by the time it is.

Even vaccine latecomers like Novavax are ahead of Inovio. Novavax recently completed and reported the favorable results of one of its ongoing phase 3 trials, and its candidate appears to be more than 90% effective against at least some viral variants.

In sum, Inovio will probably struggle to capture a significant share of the market, especially if its candidate doesn't perform well against the delta variant. 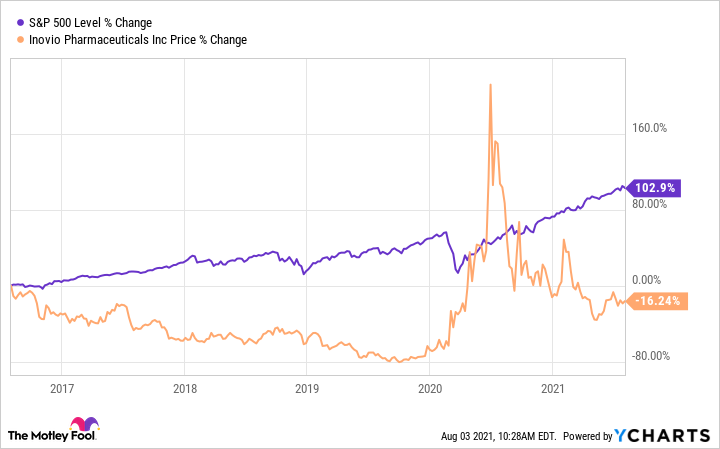 There could be a silver lining

As dire as Inovio's chances may seem, there's a scenario in which the company doesn't need to generate a lot of revenue from its vaccine to generate value for shareholders and cement its long-term health.

If it manages to get INO-4800 approved, the company will finally have the ironclad proof of concept demonstrating the safety and efficacy of DNA-based medicines that it has desperately needed for years. Even if the vaccine didn't hold up against the next viral variant without modification, investors could rest assured that its technology could be made to work.

So it's entirely plausible that its stock could still be a strong performer, given that the market's appraisal of its numerous mid-stage pipeline projects would likely jump in the event of INO-4800's commercialization.

Why Inovio Pharmaceuticals Is Gaining Today
349%