Shares of cloud data-platform Confluent (NASDAQ:CFLT) fell 17.5% in July. It's simply a breather for the white hot IPO stock, though. It debuted in public trading in June at about $45 per share, valuing the company at well over $11 billion. This was a lofty amount, considering the company reported revenue of just $237 million (representing year-over-year growth of 58%) in 2020.

It isn't unusual for high-growth tech stocks to fall in the months immediately following a successful IPO. As for Confluent's business, the "data in motion" platform is doing just fine. Spun off from professional social network LinkedIn (now part of Microsoft) in 2014, Confluent offers a service that allows businesses to "stream" data in real time. This unlocks all sorts of capabilities, from detection of cybersecurity threats to insights from customer data to creation of new services that work on and off of an organization's cloud. 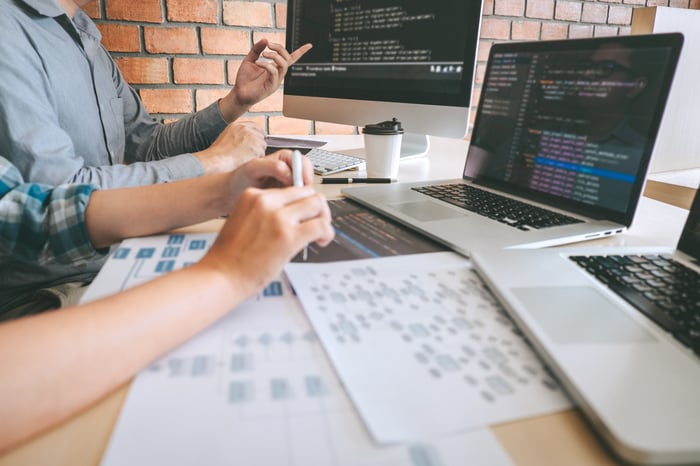 At the beginning of August, Confluent released impressive financials backing up the extensive-use cases the company claims its platform has. Total revenue climbed 64% year over year to $88.3 million, and subscription revenue to Confluent Cloud grew 200% to $20 million. Confluent Cloud is a fully managed service for the thousands of organizations that use the open source Apache Kafka data streaming framework -- developed by Conflent's founders while still at LinkedIn.

This could be a promising IT infrastructure stock to keep an eye on. Though Confluent reported free cash flow of negative $45.4 million during Q2 (and negative $66.6 million through the first half of 2021), it had over $1 billion in cash and equivalents at the end of June and no debt as a result of its highly successful IPO. This tech outfit thus has plenty of liquidity to spend on development and marketing of its platform.

Management said to expect full-year 2021 revenue of at least $347 million, representing growth of no less than 46% from 2020. That values Confluent at 29 times expected full-year sales -- a hefty price tag, even after shares took a breather last month. Nevertheless, with a sizable war chest and an IT service in high demand right now, Confluent stock is still worth putting on your watchlist if small cloud stocks with big future potential are your bag.