These aren't the normal run-of-the-mill technology companies, but they're still on the rise.

The stock market was mixed on Friday to end the week, with the Dow Jones Industrial Average (^DJI) and S&P 500 (^GSPC -1.54%) rising to new all-time highs. Indeed, the Nasdaq Composite (^IXIC) played the unusual role of getting left out amid the widespread gains.

Plenty of well-known stocks posted big gains on Friday to help lead the market higher. But there were also some surprising companies that climbed substantially. Below, we'll look more closely at Gannett (GCI 1.76%) and HCI Group (HCI -4.00%) to see why they joined the list of big gainers.

Read all about Gannett

Shares of Gannett gained more than 14% on Friday. The media company that publishes USA Today and other news outlets reported second-quarter financial results that showed progress toward embracing the changing paradigm of digital technology. 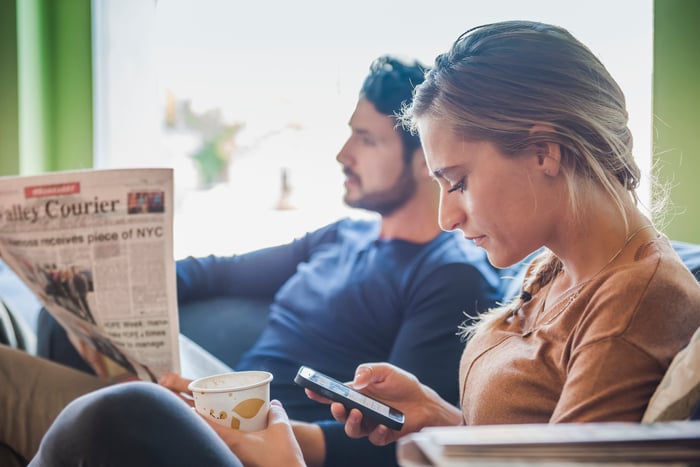 Revenue was up 5% year over year, topping $800 million. Digital revenue made up almost a third of that total, and Gannett was profitable, with adjusted net income of $30.1 million and earnings of $0.10 per share. Most had expected the newspaper publisher to lose money for the period.

Digital subscriptions were essential to Gannett's success. Digital-only subscriber counts rose 41% to 1.4 million by the end of June, with 174 million average monthly unique visitors for the second quarter. Moreover, revenue from digital marketing climbed 21.5% on a comparable basis year over year.

Like it or not, Gannett has had to adapt to changing preferences among news consumers for up-to-date digital formats that are easy to access via computer or mobile device. The publisher still has a long way to go to claim victory, but even getting this far is a big win for a company in an industry that has faced existential challenges for years.

HCI Group saw its stock jump 18%. The company reported solid second-quarter results, but investors were mostly pleased to see it considering a spinoff of its insurance technology segment through an IPO.

HCI includes several different businesses, including homeowners insurance and real estate as well as software development. Overall, net premiums earned from the insurance business were up 27% year over year, but big jumps in claim losses and policy acquisition costs led to net income taking a nearly 60% hit. The resulting earnings of $0.24 per share were down from $1.08 in the previous year's period.

However, HCI made it clear that it sees the greatest value in its TypTap Insurance Group segment. CEO Paresh Patel explained, "As TypTap continues to expand, we are making important investments to maximize TypTap's opportunity."

In a separate announcement, HCI said it had made a confidential S-1 IPO filing for TypTap to go public. Shareholders were pleased that the company is apparently looking to unlock the full value of the insure-tech unit, even though no specifics were included in the news release about the terms of an IPO.

Both HCI and Gannett show how important it is to look at stocks even in areas of the market you wouldn't necessarily pay much attention to. If you don't, you could miss out on interesting opportunities.