Higher oil prices helped these oil companies deliver a gusher of earnings in the second quarter.

Earnings season is nearing an end as most energy companies have reported their second-quarter results. Overall, the sector posted strong earnings, fueled by higher energy prices.

However, some energy stocks stood out as they absolutely crushed it in the second quarter. Three that impressed our contributors were BP (BP -1.01%), Diamondback Energy (FANG 0.53%), and Chevron (CVX -0.80%). Here's a closer look at their quarterly results. 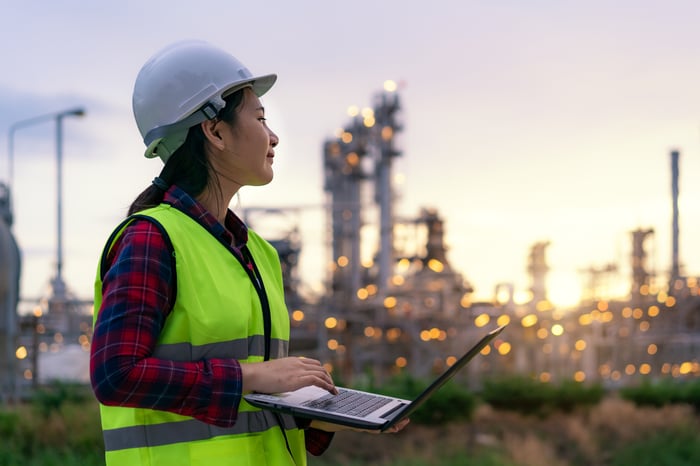 Back in the swing of things?

Reuben Gregg Brewer (BP): European integrated energy major BP, formerly known as British Petroleum, was an ugly stock to own in 2020. Not only did it bleed red ink, like its peers, but it announced a major directional change (toward clean energy) and cut its dividend a huge 50%. Add in the most leveraged balance sheet among its peers and investors were pretty worried about whether or not BP could actually live up to the plans it was laying out. 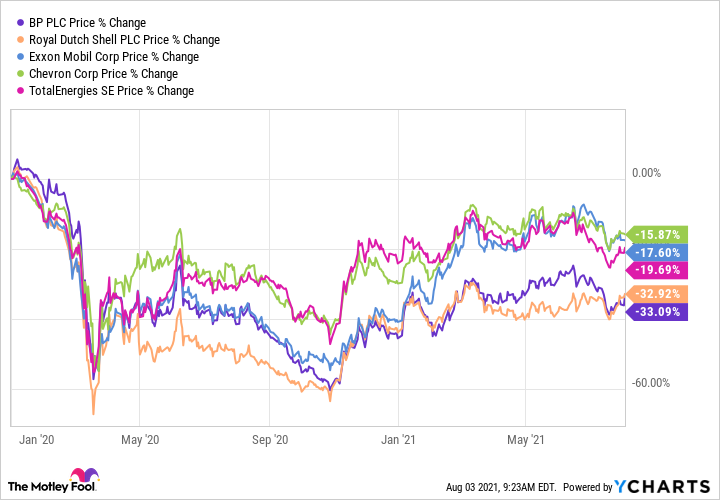 However, that's a huge and important issue here. BP's clean energy plan is basically to use the cash it generates from its legacy energy business to fund its transition to a cleaner future. In fact, management noted that if oil stays around $60 per barrel it should be able to keep rewarding investors well (via dividends and buybacks) while continuing its larger business overhaul. Although debt is still an issue to watch, the second-quarter results here suggest BP may not be as risky as Wall Street thought during last year's industry downturn.

Fueling that strong showing was a combination of higher production and oil prices. Diamondback's output surged 36% year over year, partly driven by its recent acquisition of QEP Resources. That increased output couldn't have come at a better time as Diamondback captured $45.63 per barrel of oil equivalent (BOE) produced during the period, triple what it realized in 2020's second quarter.

"We are doing more with less," CEO Travis Stice said in the second-quarter earnings release, "producing more barrels with less capital, fewer completed wells, and fewer drilling rigs." The company was able to do that thanks to a combination of cost controls and higher-than-expected volumes on newly drilled wells.

That strong showing gave Diamondback Energy the confidence to boost its dividend by another 12.5%, its second increase this year. That pushed the oil producer's dividend yield up to 2.3%, well above the S&P 500's 1.3% average. Next year, Diamondback expects to return even more money to shareholders, aiming to distribute 50% of its free cash flow, which could come via additional dividends or share repurchases. That's exactly what investors want to see from an oil company these days.

This Dividend Aristocrat proved its worth, yet again

Neha Chamaria (Chevron): Despite being one of the largest integrated energy companies in the world primed to benefit from the rally in oil prices, Chevron shares relatively underperformed peers through the first half of the year. The oil giant, though, proved its mettle yet again when its second-quarter numbers ripped past Wall Street estimates, and its cash flows touched 2018 levels despite demand for oil remaining below pre-pandemic levels.

Importantly, Chevron's second-quarter free cash flow of $5.2 billion hit a two-year high. Thanks to those strong cash flows and a tight capital spending budget, Chevron will resume share repurchases of $2 billion to $3 billion per year, beginning in the third quarter, even as it continues to cut debt. Management, in fact, reiterated its confidence in generating more than $25 billion in cash, after accounting for capital expenditures and dividends, over the next five years at a Brent crude price of $60 per barrel. That means it could effectively grow free cash flow by 10% annually through 2025.

That's the best news Chevron investors could hear as higher cash flows should also mean larger dividends, and with its second-quarterly performance, the Dividend Aristocrat just confirmed it remains one of the safest energy dividend stocks to buy and hold.