Investors' expectations may never catch up with the company's performance.

There is no free lunch. It's an idiom that can be applied in all walks of life, including the stock market. Most finance text books will tell you that an investment with low risk and high return doesn't exist. Either you take little risk and earn low returns -- like U.S. Treasury bills or savings accounts -- or you accept risk and the corresponding wide range of outcomes -- like stocks.

Yet some companies consistently prove the age-old wisdom wrong. Mastercard (MA -0.20%) has delivered for shareholders since going public in 2006 despite consistently being thought of as one of the lowest risk stocks around. Some things never change. The current environment might be offering investors another chance to get that proverbial free lunch. 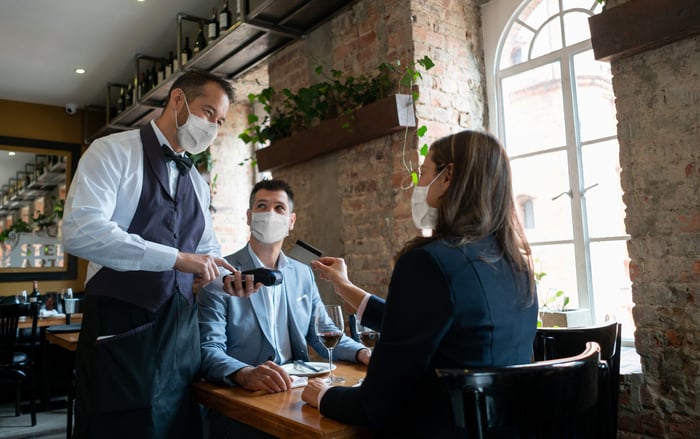 A toll road for money

Most everyone knows the Mastercard brand. They might even know the company operates an electronic payment network. What they may not realize is that the company generates revenue in three ways. First, it charges the bank that issued the card what is called a "swipe fee" -- a small percent of each transaction. They also get a small fixed amount for actually moving the money from one bank to another and sharing data about the transaction. The third way Mastercard generates revenue is especially lucrative; cross-border fees are generated when someone uses a card outside the country where the card was issued. As you would expect, those international transactions have been hit especially hard by the pandemic. More on that in a bit.

Most of the analysts that cover the company rate it as some variation of a "buy" -- 34 out of 40. Only one thinks the stock will underperform. It's been that way for years. Ask someone to name a great business with low risk and Mastercard would almost always be on the list with fellow payment network Visa. Many experts can explain how that consensus should already be priced into shares, resulting in less appreciation over time. Remember, low risk is supposed to equal low reward. What is harder to explain is how the stock keeps trouncing the market even though everyone knows it's a fantastic business. In each three-year period since the Great Financial Crisis it has drastically outperformed the broad index. Maybe the market isn't so efficient after all.

On paper, the pandemic is over

Since early in 2020, the spread of COVID-19 has morphed consumers' behavior. After an initial slowdown, spending ramped back up. It just happened in different ways. As evidenced by the record year of most online retailers, people kept buying stuff. In fact, Mastercard's second-quarter results showed that in terms of overall spending, it's all the way back. Revenue outpaced the same period of 2019 -- before shutdowns, social distancing, and remote work became commonplace. Gains in consumer spending even drove U.S. second-quarter GDP above its peak prior to the pandemic.

One thing that hasn't returned to normal is cross-border fees. They made up 24% of the company's revenue in its second-quarter report compared to 33% in 2019. On the recent earnings call, CEO Michael Miebach said the company is seeing improvement and expects the trend to continue as more countries open their borders post-pandemic. In a move that should help, Europe recently ended its 15-month ban on American travelers, although the conditions vary by country.

Will looming threats materialize or fizzle out

Because of its dominant position, the company faces challenges unlike any its seen since going public. First, Congress has gotten much more active in questioning the tactics of companies that appear to control industries. That has made headlines with Facebook and Amazon, but Mastercard and Visa could be in the crosshairs too. The pressure already caused the companies to delay a proposed increase in swipe fees that was slated to go into effect this year.

Second, easy money and a new generation of consumers has spawned a universe of fintech companies taking aim at all of the traditional players in the financial system. That said, both Mastercard and Visa have announced many acquisitions and partnerships to keep their hands in any disruption of the payment model.

The threats are real. But if Mastercard has proven anything to shareholders over the years, it's that it can deliver market-beating returns in any regulatory or economic climate. Those doubting the company should take note of its history of proving them wrong.