There won't be another cryptocurrency "moon mission" anytime soon.

Even after showings signs of a recovery in recent weeks, the price of two leading digital coins, Bitcoin (BTC 1.55%)and Ethereum (ETH 2.52%), have fallen almost 30% since May. Meanwhile, trading volume for all cryptocurrencies plunged more than 40% in June, and it hit year-to-date lows last month.

But be warned, even as cryptocurrencies seem to be building positive momentum again, the fundamentals still look troubling, and it could get worse in the near future. As a result, Bitcoin, Ethereum, and other cryptocurrencies all face mounting risks looking ahead. 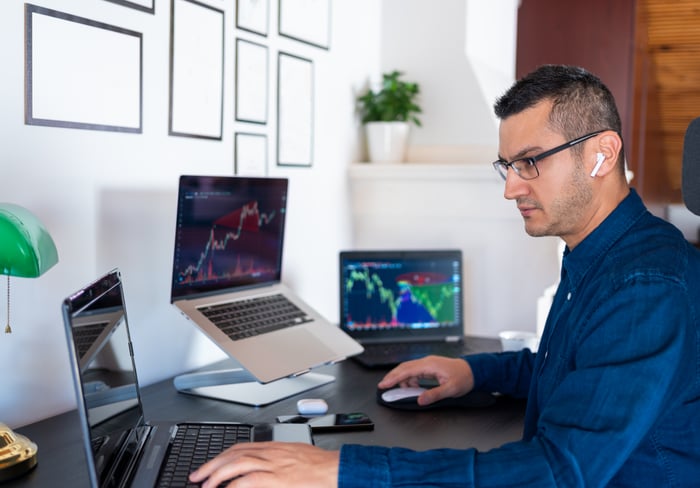 The end of the line for cryptocurrencies in China

For years, Chinese investors had been some of the biggest drivers of the cryptocurrency bull market. This is because of stringent capital outflow controls enforced by the central government. In fact, citizens are only allowed to purchase $50,000 worth of foreign currencies every year, so shifting hard-earned money abroad through cryptocurrencies became a no-brainer.

This has inflated the value of some coins due to limited supply. For example, let's say Chinese tech billionaire Chen wishes to transfer $48 million to the Cayman Islands via a cryptocurrency known as the send-me-now (SMN) coin. However, there are only 100 SMN coins available, so Chen must first bid up the price of each coin to $480,000 to make it a one-time transaction. One can see how the price of cryptocurrencies could go up frequently and suddenly this way.

But the Chinese government doesn't seem to like this loophole. Recently, the ruling Communist Party barred financial institutions and corporate entities from doing business with cryptocurrency investors. In addition, provinces are beginning to outlaw cryptocurrency mining operations, citing environmental concerns (which we'll get to later). It's hard for any asset to rebound in price when its major buyers have been barred from the market, and the recent volatility for non-fungible tokens (NFTs) has only added fuel to the flames.

NFTs are not what they seem

The logic behind the NFT hype is simple: authentic, physical art is expensive. NFTs are authentic, digital art. Therefore, NFTs should be expensive as well (corollary: NFT coins go to the moon). Unfortunately, that is far from the case. Physical artwork isn't just expensive, because people who buy it are connoisseurs who like drinking red wine while viewing their collections. Much of the demand in that world is also driven by tax avoidance (that is, the reduction of taxes through legal means).

The setup works like this. Let's say a high-net-worth individual (HNWI) named Sarah purchases a $5 million piece of artwork from an auction and ships it directly to a free port -- a designated economic zone where customs duties and taxes do not apply until an asset leaves the zone -- to legally avoid the sales tax. Five years later, the artwork appreciates to $25 million. Sarah then hires an appraiser, who usually has a financial incentive to inflate the piece's value, to certify the painting. She then donates it to a non-profit and can claim the full market value of the piece at certification ($25 million) as a deduction against her income, usually over a few years. Because HNWIs do this, the value of artwork can also become grossly inflated.

But the demand is not replicable when it comes to NFTs. First of all, most non-profits don't even accept cryptocurrency. What's more, there is a lot of confusion as to NFTs' classification. Suppose the Internal Revenue Service determines Sarah's NFT was a collectible instead of an intangible capital asset, then tough luck. In that case, she could only deduct her cost basis ($5 million) for her donation -- resulting in a redundant transaction. Until there is greater clarity about how they are classified under the tax code, there is little inherent value to NFTs based on the Ethereum blockchain. On a side note, it's probably in the best interest of Uncle Sam that it stays this way.

Meanwhile, their utility for digital art collectors is very controversial. Buyers are getting exclusive rights to an item but often at a very high price for something that one can find all over the internet (i.e., a video from a professional basketball player). As a result, it's unlikely the market could attract significant capital from investors long term. Regulations haven't caught up with other possible uses like in real estate, so while NFTs are an innovative way to store something like a land deed, the practice needs greater industry and regulatory approval before taking off.

Moving back to Bitcoin, the energy cost of mining it has gotten out of hand. Because Bitcoin's reward keeps on halving, miners need to keep upgrading their equipment to stay profitable. For example, the latest Bitcoin mining machine, the Antminer S19, has a power consumption of 3,250 watts, equivalent to a central air conditioning system. At current coin and energy prices, miners typically spend close to $2,000 on their electricity bills per year, per machine. Bitcoin mining now consumes 0.55% of global electricity production, and it's simply not sustainable. To put it into perspective, one Bitcoin transaction consumes about the same amount of energy as 1.2 million Visa card transactions.

Bitcoin and Ethereum are two of the biggest flag-bearers for the overall cryptocurrency market, and as of this writing, they have severe utility and network issues that are unaddressed. Investors should understand that prices will continue to be extremely volatile as well. For those reasons, I believe the cryptocurrency bear market is far from over.

How Bitcoin Could Reach a New All-Time High
376%