The lithium miner significantly raised its full-year 2021 guidance for both revenue and a key profitability metric.

Livent (LTHM -3.92%) surged 8.6% on Friday following the lithium producer's release after the market close on Thursday of a strong second-quarter 2021 earnings report.

The largest U.S.-based lithium pure play, based in Philadelphia, easily beat the Wall Street consensus estimates for revenue and earnings. But what probably most electrified investors was management's raising of full-year 2021 guidance for revenue and a key profitability metric.

Through Aug. 6, Livent stock has gained 222% over the one-year period, compared with the S&P 500's 34.5% return. Most lithium mining stocks have performed well over the past year, largely thanks to investor optimism stemming from the Biden administration's support of electric vehicles -- lithium is a key component in the lithium-ion batteries that power EVs -- and improving conditions for end markets of lithium. Many customers delayed their purchases of lithium during the early stages of the COVID-19 pandemic because of supply-chain disruptions. 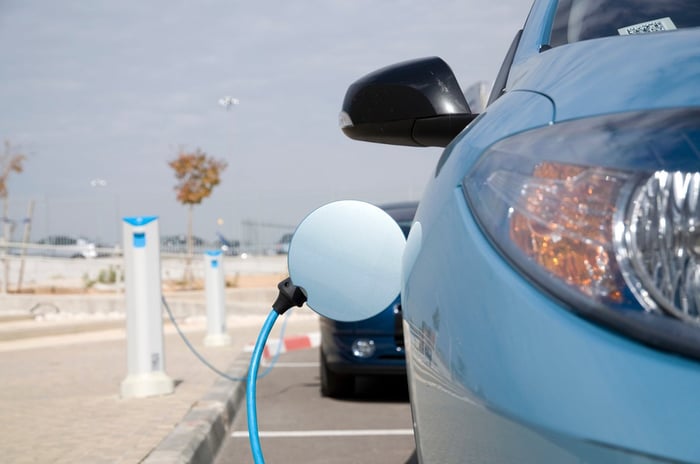 Revenue increased 11% from the first quarter, which the company attributed to a combination of higher volumes sold and higher prices across its key lithium products.

Wall Street was looking for adjusted EPS of $0.02 on revenue of $88.8 million, so Livent exceeded both expectations, with the revenue beat a big one.

Capacity expansion projects resumed in the U.S. and Argentina

In early May, when Livent announced its first-quarter results, it said it had "resumed its capacity expansion plans in the United States and Argentina," which are "backed by the execution of recent long-term supply agreements." These projects were paused in March 2020, soon after the pandemic began. 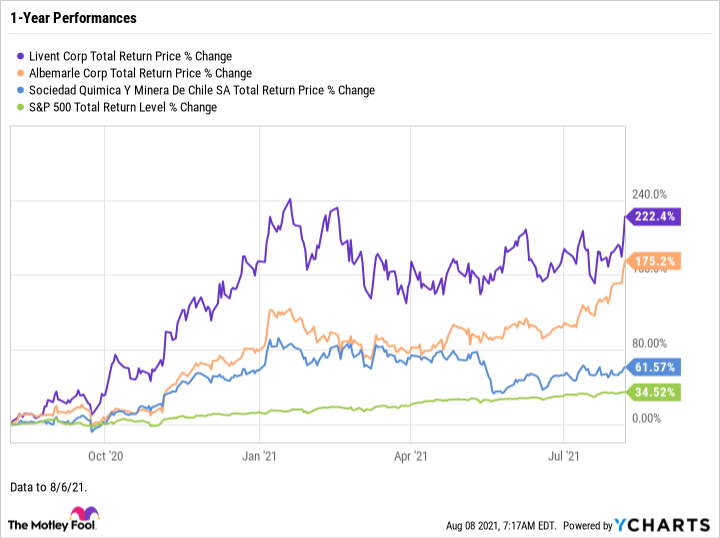 Data by YCharts. Albemarle and SQM included for context; neither is a lithium pure play. Shares of all three large lithium miners have been shown up by Piedmont Lithium stock, up 818% over the last year; however, Piedmont is speculative as it's not yet commercially producing lithium.

Here's part of what CEO Paul Graves had to say in the earnings release:

We were pleased to complete the equity issuance and are focused on executing on our capacity expansion projects, which are progressing on-schedule. Increasing production capacity and building upon our low cost and sustainable operations will strengthen our commercial footprint and enhance our position as a partner of choice to leading auto OEMs [original equipment manufacturers] and battery producers.

Graves is referring to Livent's public stock offering in June, which raised about $262 million.

The company said the guidance increases stem largely from higher lithium pricing, as there are "limited additional volumes available."

Graves commented on the lithium market and the company's outlook for the market:

Lithium market conditions remain very positive in 2021 and we see the trends continuing into 2022. Pricing conditions have significantly improved during the year and we have seen a notable improvement in lithium hydroxide and carbonate demand alongside strong global electric vehicle sales growth. Increasing support for electrification from OEMs [original equipment manufacturers], governments, and consumers is solidifying expectations for substantial long-term lithium demand growth. However, this is not being met with sufficient reliable, qualified supply expansion, which we expect will be apparent as the market remains tight and occasionally short, particularly over the next few years.

In short, Livent's results are coming back strong after last year's pandemic-driven setbacks.

Why Top Lithium Stocks Like Livent Plunged This Week

Why Livent Stock Sank 8% on Wednesday

Why Shares of Livent Powered 29% Higher in August
366%