The stock lost $75 a share in two days at the end of the month.

Shares of Cassava Sciences (SAVA 3.81%) lost 18.6% of their value in July, according to S&P Global Market Intelligence data, but that's a bit misleading. The stock started the month out at $86.60 on July 1 and for the most part, steadily rose throughout the month -- until, that is, July 29. 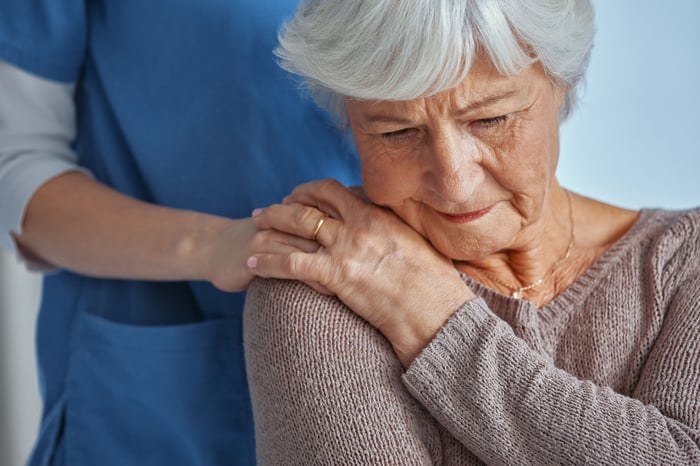 The interesting thing is the results that sparked that precipitous drop were positive. The preliminary results from the company's phase 2 trials, presented during the Alzheimer's Association International Conference, showed the drug led to an improvement in cognition for Alzheimer's patients with no adverse side effects. After nine months, 66% of the 50 patients in the trial saw an average improvement of 3 points on the Alzheimer's Disease Assessment Scale-Cognitive Subscale (ADAS-Cog).

Typically, Alzheimer's patients see a decline of 5 ADAS-Cog points in a year, meaning that a decline of 4 points would be typical over nine months.

So why did this lead to the biotech stock's shares plummeting? There are several reasons for that. It's not unusual for investors to sell the news, and the resulting sell-off continued as many of those investors had already made their money on the stock, which is still up more than 3,330% over the past 12 months. It's also likely that some investors were underwhelmed by simufilam's trials, as a 3-point difference on the ADAS-Cog may not be considered by some to be statistically significant.

Since its July decline, Cassava stock has bounced back. On Monday, the stock was as high as $106.35 per share.

A lot is riding for Cassava on whether or not simufilam is approved. The company has $278.3 million in cash but no revenue, and it lost $5.1 million in the second quarter. That simufilam appears to have fewer side effects than Biogen's recently approved Alzheimer's therapy, Aduhelm, may be enough to get the drug approved for Alzheimer's treatment.

It's a huge potential market. The World Health Organization says more than 50 million people worldwide suffer from the deterioration of memory, thinking, and behavior that is associated with dementia, and Alzheimer's is the most common type of dementia, representing 60% to 70% of dementia patients.

Simufilam, a twice-daily oral tablet, would likely be much less expensive than Aduhelm, which is given via a monthly intravenous injection and is expected to cost $56,000 a year per patient. A lower cost and greater ease of use would be significant competitive advantages for Cassava's lead drug, but ultimately it all comes down to whether the Food and Drug Administration approves simufilam or not.