Please ensure Javascript is enabled for purposes of website accessibility
Log In Help Join The Motley Fool
Free Article Join Over 1 Million Premium Members And Get More In-Depth Stock Guidance and Research
By Alex Carchidi – Aug 5, 2021 at 7:22AM

Things are changing, but the picture is getting more positive as time goes on.

By developing a drug to treat Alzheimer's disease, Cassava Sciences (SAVA 3.81%) is daring to tread where others have stumbled. Like other biotechs without any revenue, its value proposition to shareholders is contingent on the success of its clinical trials.

And right now, Cassava is looking quite good in that department. The company's drug, simufilam, recently completed its phase 2 clinical trials, and the company plans to start phase 3 before the end of 2021. Still, the competitive landscape for Alzheimer's therapeutics isn't exactly like any other market, and that's why smart investors understand three dimensions of this company that other people don't. 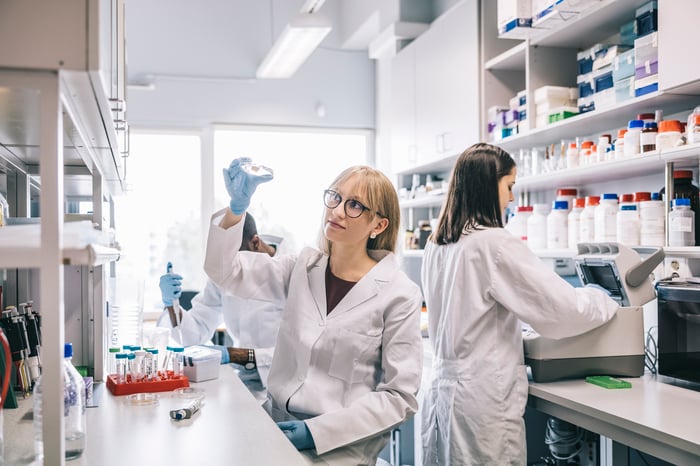 1. The stock is starting to appeal to a different group of investors

On July 29, Cassava reported a packet of data showing that simufilam improved cognition, slowed the progression of Alzheimer's disease, and elicited positive changes in a smattering of biomarkers. To nobody's surprise, the stock is surging as the market prices in the scale of the future revenue that simufilam is expected to generate if it gets approved.

There's still a significant risk of a late-stage failure. But the chance that Cassava will succeed with simufilam is higher than ever before, and everyone knows it. That means the stock is likely to look a bit pricey to biotech speculators who target early-stage companies, aiming for massive growth throughout the clinical trial process.

In short, there's an opportunity here for investors with an average risk tolerance who wouldn't usually be comfortable with buying biotech stocks. Such an opportunity could buoy the stock's price further even if speculators lose interest.

It's incredibly difficult to make drugs that treat Alzheimer's disease. A handful of companies have tried and failed outright. Others, like Annovis Bio, have reported positive mid-stage results that later fell apart. And for Biogen, which recently succeeded in commercializing an Alzheimer's therapy, significant questions remain about the treatment's ability to actually help patients with the symptoms of the disease.

Frequently, one company's breakthroughs or setbacks seem to ripple through the stock prices of other Alzheimer's drug producers as the market swells with confidence or pessimism in light of new information. But for investors with a long time horizon and an adequately diversified portfolio, there's no reason to trade in and out of Cassava based on what is happening elsewhere in the Alzheimer's space. 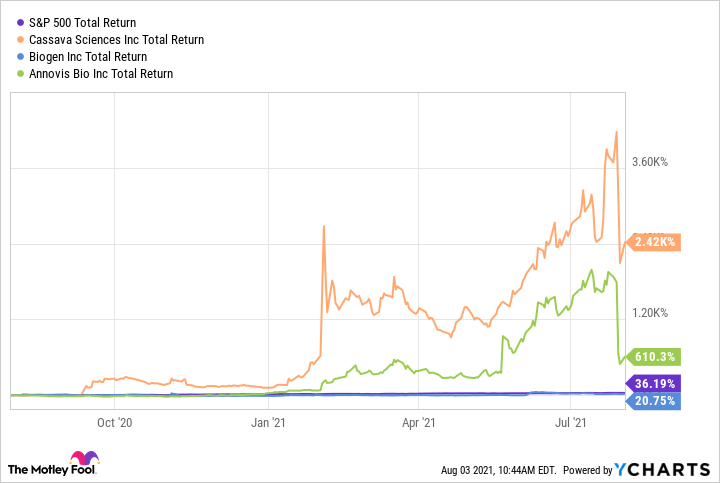 Unless, that is, the new information specifically pertains to Cassava's ability to compete, assuming simufilam is eventually proven effective and approved for sale. Other businesses might be making drugs that have a different mechanism of action, which means that they might not even eat into simufilam's market share, because the drugs could potentially be prescribed together. Or they might be targeting a different segment of the patient population entirely, meaning that they don't pose any threat. And those other therapies are almost certainly going to have a different side-effect profile, which could be yet another point of differentiation.

So don't jump to conclusions about Cassava's merit as an investment based on another company's clinical trial results, even if others do. It's unlikely that any other program offers an apples-to-apples comparison, and based on what we've seen in the Alzheimer's therapy market so far, that matters.

3. At least three different paths could lead to approval

Alzheimer's disease is quite complicated, and that means there's more than one road for Cassava to take with simufilam, depending on what it can prove in clinical trials.

Cassava plans to conduct two phase 3 clinical trials to test simufilam's efficacy, starting before the end of this year. Both will compare the drug to placebos.

The first trial will look for improvements in a pair of cognitive benchmark tests that map to a patient's ability to orient themselves in time and space and to care for themselves. In contrast, the second trial examines the drug's ability to slow the progression of Alzheimer's disease over time. If Cassava's therapy can actually help patients to have improved cognitive functioning or slower progression of the disease, it'll be a huge win. Proving efficacy in both dimensions would be even better. But smart investors know that it might not need to prove either.

Beyond those two studies, the company will also need to replicate its recently reported results that showed that treatment with simufilam improved all of the biomarkers it measured that are thought to be related to the disease. Notably, Biogen was able to get its drug, Aduhelm, approved on the basis of its favorable biomarker data even though it didn't have much evidence to support improvement in cognitive benchmarks or in the rate of Alzheimer's progression.

It remains to be seen whether any other competitor will be able to convince regulators to approve a drug using a similarly limited set of data. At the moment, such an approach looks fully within reach for Cassava, especially considering that it does have some evidence that simufilam improves cognitive benchmarks in addition to slowing progression. And even if future updates don't look as positive, the company's lead program is far from finished.