Please ensure Javascript is enabled for purposes of website accessibility
Log In Help Join The Motley Fool
Free Article Join Over 1 Million Premium Members And Get More In-Depth Stock Guidance and Research
By Zhiyuan Sun – Updated Aug 11, 2021 at 10:07AM

This well-know discount brokerage is revolutionizing the world of decentralized finance.

It's only been a few weeks since its IPO, but shares of discount brokerage Robinhood Markets (HOOD -0.11%) have more than doubled in value at one point and are currently trading up nearly 50% from their initial offering price. The stock has had a polarizing effect on the investing community. Many old-school investors think Robinhood stock is heavily overvalued because it's now trading at 60 times 2020 revenue despite posting just a marginal profit.

But a newer class of retail investors sees things quite differently. They think the company and its namesake app represent an important (and more affordable) means to an end for millions of non-traditional investors to get in on the gains that investing can provide. Robinhood's no-fee, easy-access structure allows virtually anyone to sign up and take part in investing, including the trendy meme-oriented short squeezes that have yielded mouthwatering returns for some. 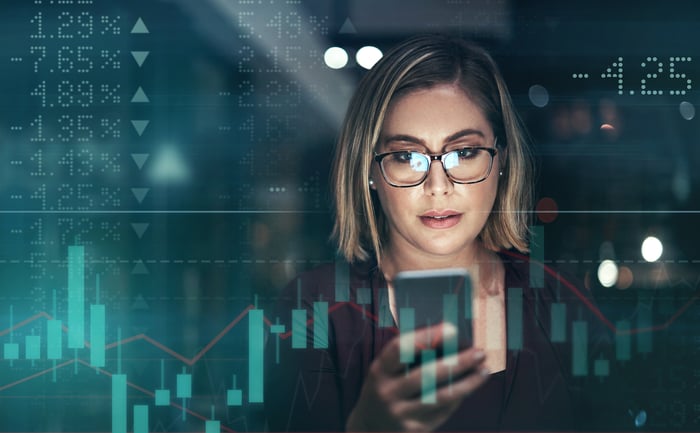 It's these "proletariat" investors' efforts to quickly gain the upper hand in the stock market revolution that strongly suggest Robinhood stock has plenty more room to run. Let's look at three reasons why a 10-bagger for Robinhood shareholders has potential.

1. Robinhood has a skyrocketing user base

Robinhood currently has a monthly active user count of 17.7 million and growing. More than 80% of new users signed up through word of mouth or referrals. The r/WallStreetBets community forum on Reddit was one of the big contributors here. Some of the discussions on this subreddit have served as an unofficial marketing campaign on behalf of Robinhood. Readers on this popular online forum see regular postings from traders who "flex" their gains and "glorify" their losses via screenshots from the Robinhood stock trading app. The new viewers of the subreddit interested in investing want to mimic their heroes using the same tools.

But it's not just about having a dedicated community of core users. Robinhood charges no commissions on stock or options trades from users and generates part of its revenue from interest on margin loans and payment for order flow from institutional market makers. The latter remains controversial, but it's hard to complain when one is trading for free. That's why new customers continue to pour in, even after the company made headlines regarding how it handled the GameStop short squeeze saga.

2. Robinhood has potential for international expansion

Currently, Robinhood only operates in the U.S., offering services to citizens and permanent residents with an American address. That means Robinhood doesn't have any official international revenue. So one way of maintaining its current growth streak would be to expand the same commission-free brokerage model across the Americas and into Europe and Asia. Last year, the company planned to launch its namesake app in the U.K. Those efforts were postponed as Robinhood was forced to turn its attention to the domestic market and focus more on its regulatory compliance.

3. Integration with other asset classes

Robinhood isn't just about trading stocks and options. The company also facilitates trades of rare metals like gold, as well as cryptocurrencies, all commission-free. Popular coins such as Bitcoin, Ethereum, and Dogecoin are all available to trade. In the first quarter of the year, cryptocurrencies accounted for about 12% of Robinhood's assets under custody.

But its innovative, low-fee model could seriously disrupt traditional exchanges like Binance and Coinbase, which typically charge hefty commissions as a source of revenue. The company is still barely a part of the fast-growing cryptocurrency market, which sees about $80 billion worth of coins exchanged each day. So there's a lot of market share to capture. Moreover, expansion into other assets like cryptocurrency derivatives, stock futures, 41(k) and retirement fund management, and bonds could further increase its adoption among institutional investors, especially for the latter.

The continued growth of users enjoying the app, its potential to sustain that through international expansion, and broadening its asset class to cryptocurrencies are all factors that set the stock up to generate high returns for the company and its shareholders. Add to that the "free marketing department" consisting of WallStreetBet traders which helps the company cut expenses and turn a profit in parallel to revenue growth. All this adds up to something most unicorn companies cannot do.

New and potential investors should keep in mind that the market is expecting a lot out of Robinhood and that is priced into its current valuation. If the company stumbles in its expansion efforts, or it encounters financial regulatory roadblocks, the stock is likely to see some real volatility and the potential for substantial losses.

Overall, the analysis suggests Robinhood has the makings of a top financial stock and real potential for 10-bagger returns.