Don't fall for another meme stock -- these investments are safer and more stable over the long run.

Robinhood Markets is the latest meme stock attracting investors today. The recent IPO surged from an opening price of $38 to a high of $85 less than a week later, though it has fallen since then. It can be exciting to see such an incredible rise in value, but investors shouldn't forget this is a company that went through some bad press earlier this year. It drew the ire of investors who couldn't make trades during the meme frenzy, which could wreak havoc on the stock if it happens again.

The business itself lacks a defendable competitive advantage that makes it a can't-miss investment. Add a staggering $1.4 billion loss during the first three months of 2021 into the mix, and you've got yourself a highly risky and volatile company.

Rather than buying the hype, investors should consider growth stocks with stronger business models that are more likely to grow over the years. Petco Health and Wellness (WOOF 1.08%), DocuSign (DOCU -3.50%), and Mastercard (MA -0.20%) are all stocks that are better investments over the long haul. Here's why. 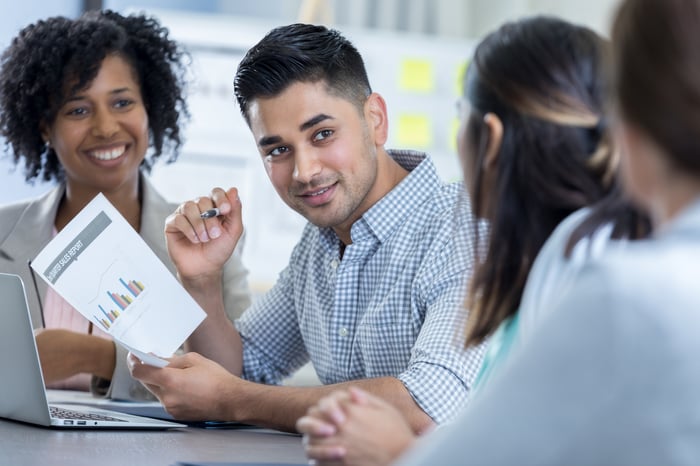 Adopting a pet was a popular trend during the early stages of the pandemic when people were stuck indoors. And although not everyone will keep their pets -- there has been a surge in people abandoning their animals, and shelters in both New York and Los Angeles are near capacity -- the industry was growing before the pandemic, and will continue growing after it is over. In 2019, the U.S. pet industry rose by 7.3% to a value of $97.1 billion, and last year it grew by 6.7% to a new high of $103.6 billion. The American Pet Products Association projects growth of 5.8% this year, with the industry hitting $109.6 billion in value.

And all those pets will continue to need supplies and care. Petco is well-positioned to meet that heightened demand, as it sells pet supplies and operates animal hospitals. The stock began trading this year, but unlike Robinhood, it hasn't surged; in fact, it has fallen more than 32% since it first started trading on Jan. 14, while the S&P 500 has increased 17% during the same period.

Petco is coming off a record first quarter during which its sales grew 27% to $1.4 billion. And while there could be a slowdown as pandemic trends ease, the company noted that it was not only adding customers, but was also gaining market share. Although there may be some question marks as to how much growth Petco might achieve once things are fully back to normal, there's little doubt that it will continue growing. Investors may be overlooking the stock right now, but another strong quarter by Petco when it reports earnings later this month could quickly change that.

One trend that might not end after the pandemic is the popularity of signing documents virtually. DocuSign has been the big name in that space, making it easy for people to sign documents from anywhere.

For the three-month period ending April 30, the company's sales were $469.1 million -- a 58% increase year over year. What I love most about the business is that it is largely subscription-based; $451.9 million of that top line was recurring revenue. Management projects that for the current fiscal year (which ends on Jan. 31, 2022) revenue will total $2 billion, for a year-over-year increase of 38%.

Although the company remains unprofitable, DocuSign's gross margins are high at about 80%. And with the company already near breakeven, with a net loss of just $0.04 per share last quarter, it may not be too long before it finishes in the black. The stock has risen 40% over the past year (compared to the S&P 500's gain of 32%), but with more growth ahead, DocuSign could continue to increase in value.

Credit card company Mastercard had an off year due to the pandemic in 2020, as a lack of travel hurt its top line. At $15.3 billion, its net revenue was down 9% from the $16.9 billion it reported a year earlier. But that's not a trend that's likely to last, and in the company's most recent earnings report for the period ending June 30, net revenue of $4.5 billion was up 36% year over year. And the future could be even brighter: According to the company's data, U.S. retail sales have been growing for 11 straight months. In both June and July, the growth rate has been up about 11% year over year.

Retail investors also have another reason to jump on the stock: Mastercard is crypto-friendly, and has cards that allow consumers to use some digital currencies on its network. It is also offering a crypto rewards card (launching this summer) in partnership with Gemini, a regulated cryptocurrency exchange.

Unfortunately, that hasn't been enough to drum up excitement surrounding Mastercard -- its stock has been lagging behind the S&P 500 over the past 12 months, rising just 13% to the index's 33%. But for long-term investors, there are considerable growth opportunities from this rock-solid business. Whether it's from the growing popularity of cryptocurrencies or a strong economy, Mastercard is a safe growth stock you can just buy and forget about.