A lack of bad news was enough for investors to push up the stock of the electric vehicle start-up.

Lordstown Motors (RIDE 4.24%) has had a rough time since it announced in May 2021 that it was slashing its 2021 production plans and needed to raise fresh capital. Soon after that, it basically confirmed some issues raised in a short-seller report, admitting that it might not survive as a business (a so-called "going concern" warning). The CEO and CFO then resigned.

Last night, the company reported its first quarterly financial update since that time, and investors initially breathed a sigh of relief. The stock jumped 14% as trading opened today. But those gains didn't hold, and shares were up only 3.9% as of 10:30 a.m. EDT.

The initial jump came because the company said it was maintaining its previously-cut production plans. It still aims to be producing its Endurance electric pickup truck before the end of the year. The "limited vehicle production" should still begin in late September. 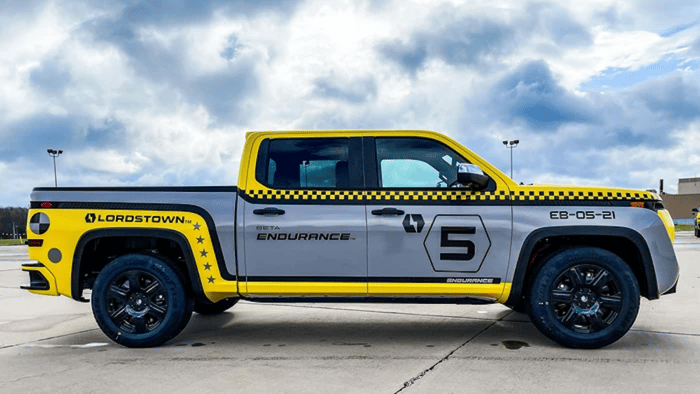 The interim CEO also gave investors some hope that there could be a new strategy to add revenue. But the lack of any new negative news wasn't really enough for investors to believe the company's future now looks rosy.

The company said it is limiting production "to coincide with commercialization road map." That seems to mean a combination of only having limited demand and having to navigate what it says are supply chain issues.

Potential positive news came with a pivot in strategy to possibly use its vast factory to add a revenue stream through contract manufacturing. Management said it is only using about 30% of the 6.2 million square feet in the factory it bought from General Motors.

Interim CEO Angela Strand issued a statement saying, "The size and scope of our facility is such that we could easily accommodate additional manufacturing partners while still affording us the ability to build a successful Endurance program."

The fact that the company didn't alter its production plans again, and might have a strategy to add value in the future, was enough to keep the stock from declining today. But the overlying issues remain, particularly if the company isn't seeing robust demand. That fact is likely what tempered the rally today, and what will keep pressure on the stock unless it changes.