These profitable technology stocks will keep performing in any downturn.

Recessions don't happen often, but they are among the most frightening times for investors when they do occur. Recessions can be dangerous times for riskier stocks and companies that are unprofitable or have unproven business models. To invest during a recession, consider these five technology leaders that have the proven businesses and cash on hand to not only survive, but to thrive in any market environment.

Apple (AAPL -0.34%) is a leading smartphone manufacturer, and its iPhone is the second most popular brand globally. The company has moved well beyond selling phones, tablets, and computers; Apple has built an ecosystem of services that generate recurring revenue, including:

Apple also charges a 30% fee on most revenues that pass through its massive App Store. The company generated $274 billion in revenue in 2020 and is very profitable, posting a net profit margin of 20%, or $57.4 billion in net income. Apple had $193 billion in total cash and marketable securities as of its most recent quarter (Q3 2021), so it has plenty of resources to handle a recession.

2. A cloud and business software leader

Microsoft (MSFT 0.13%) has a handful of businesses, but is most known for its Windows operating system that enjoys more than 87% market share of the computer market. Its Office 365 software suite is also used by most businesses, and its cloud segment generated $60 billion in revenue in 2021.

These products and services are "mission critical" for Microsoft's customers, meaning they need them to function. Switching to a competitor is difficult because it costs time and money to do so, plus the alternatives are few and far between. Microsoft also has $130 billion in cash and equivalents at the end of its 2021 fiscal year, giving the business a ton of financial firepower to endure whatever comes its way. 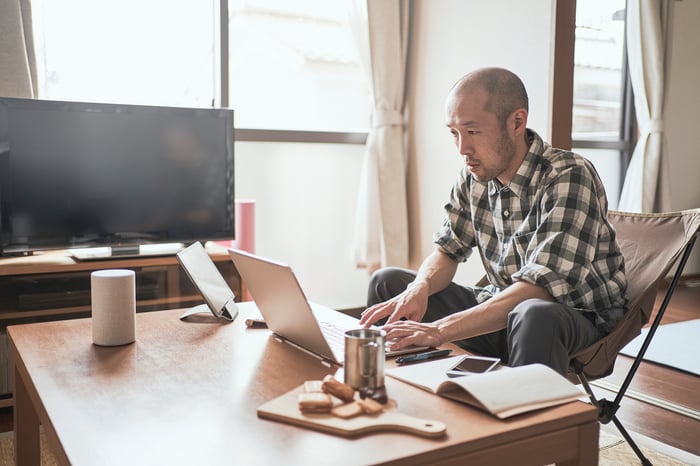 Facebook (META 2.53%) is a social media powerhouse. It owns several top platforms, including Facebook and Instagram, as well as additional app and product companies, such as WhatsApp and Oculus, a company that makes virtual reality products.

Facebook generated nearly $86 billion in revenue in 2020, growing 22% over 2019 despite the pandemic. The company makes most of its money by selling user data to advertisers, who then put ads on Facebook's platforms. When people tend to be going out less and potentially spending more time on social media during a recession, Facebook's business can do very well. The company had $64 billion in cash and equivalents at the end of Q2 2021, its most recent quarter, so it's flush with cash and poised to thrive in a recession.

Intel (INTC -1.41%) is a leading manufacturer of semiconductor chips, including the x86 microprocessor, the "engine" behind many of today's computers and data centers. The business did nearly $78 billion in 2020, and $20.8 billion of that fell to Intel's bottom line as net income.

Intel's business has shown to be durable during COVID-19. Revenue grew 8% in the 2020 pandemic year, and as of its most recent quarter (Q2 2021), the company had $4.7 billion in cash and equivalents on hand. Intel's data center group, its second-largest segment, grew 11% in 2020 to $26.1 billion, showing that it's growing through the pandemic challenges. It could also indicate that it's durable enough to thrive through any economic downturn.

5. A little bit of everything in the tech world

Alphabet (GOOG -0.44%) (GOOGL -0.55%) is one of the most iconic companies in the technology sector. It is a true conglomerate, with many business segments, including Google search, YouTube, Google network, and Google Cloud. Alphabet's services are used throughout the internet, which has become almost a basic need for the modern world. Recession or not, people will continue to search, email, and watch videos on YouTube.

Alphabet grew its revenue by nearly 13% to $182.5 billion during the 2020 pandemic year, and $40.2 billion of that ended up as net income, representing a net profit margin of 22%. Alphabet's products are also clear market leaders, with product names such as Google, Gmail, and YouTube becoming verbs for consumers. Alphabet's sticky products and services could continue to thrive in a recession, as long as people continue to use the internet. And the company's $135.8 billion pile of cash, equivalents, and marketable securities offers a large financial safety net for good measure.

All five of these companies are massive market leaders, with proven businesses and strong balance sheets. While no company is a risk-free investment, these technology stocks are a good starting point for investors looking for both quality and dependability, even during the toughest of times.