Far from the hype of newly public companies blending finance and technology -- known as Fintech -- is Jack Henry & Associates (JKHY 0.70%). For more than four decades the company has been quietly helping financial institutions leverage technology to improve their business performance, as well as their members' experiences. In a market rife with hope and speculation, it's this steady grower that I plan on adding to my portfolio.

With its market capitalization of less than $13 billion after almost 45 years in business, it's no surprise if you've never heard of Jack Henry. It serves the financial industry -- namely banks with up to $50 billion in assets and credit unions -- with its core operating platforms and complimentary digital solutions. That can include transaction processing, private cloud environments, data security, online and mobile services, and dozens more. It is organized in three segments serving banks, credit unions, and what it calls non-core customers. 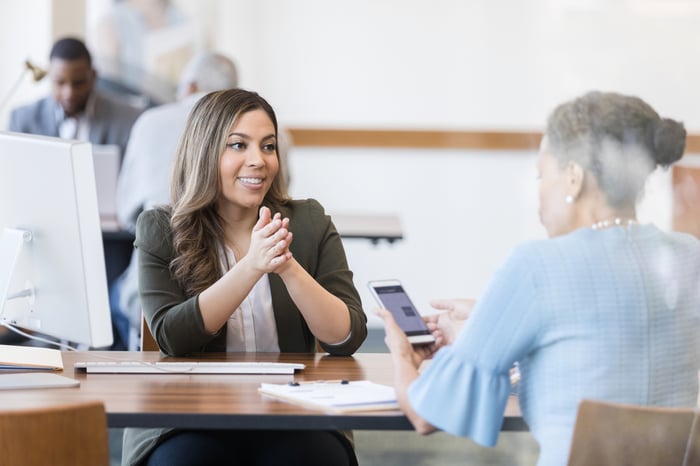 Jack Henry follows the typical "land and expand" model for a software company. It establishes a relationship with a customer and then wins more and more of that financial institution's spending by incorporating more of its services over time. The financial industry isn't one to embrace change, so it's been a slow and steady advance. Still, the numbers are impressive. In the past 2 decades revenue has grown almost 800% and shares are up 1,200%. 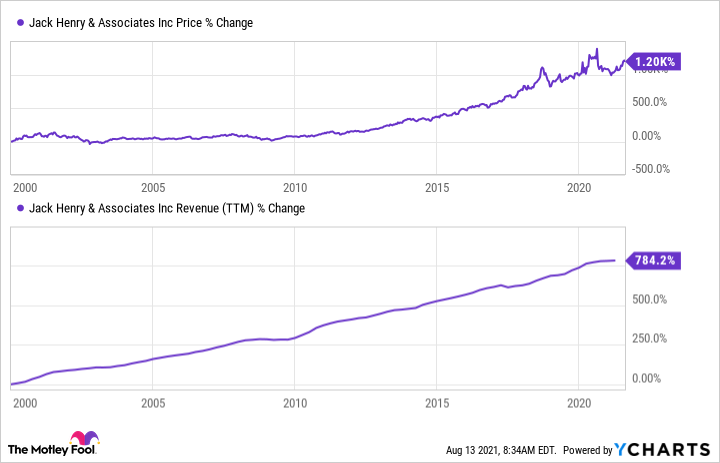 The company has been managed conservatively, with no debt and careful investment. That's kept its return on invested capital high, averaging about 24% over its last five full fiscal years. That's a bit better than another well-managed software company -- Microsoft. Add in a 1.1% dividend that has grown an average of 13% annually over the past decade and the reasons for owning the stock become even clearer. It's still only paying out about one-fourth of earnings as dividends.

Plenty of opportunity remains in its core market. Despite its long history, Jack Henry counted about 20% of potential banks as customers and only 16% of credit unions at the end of 2019 -- it's most recently reported data. This year, those customers are planning on spending more. A survey by Cornerstone Advisors showed 73% of banks and 77% of credit unions planned on spending more money on technology in 2021 than they did last year.

Unfortunately, that opportunity to add customers is shrinking. In its most recent annual filing, management called out the decline in the number of banks it served due to mergers and acquisitions. As of 2019, the number of commercial banks and savings institutions had declined 20% since 2014 according to the Federal Deposit Insurance Corporation (FDIC). The drop was 16% for credit unions.

Management is also seeing fewer options on the acquisition front. It's purchased 34 companies since 1999, but doesn't expect that pace to continue. It believes it has few gaps in its product lines at this point. Also, it doesn't see much opportunity to expand its addressable market in the financial services industry. It's the type of talk you would expect from conservative leadership team.

It sounds dour. Another take is that industry consolidation offers an opportunity. With more than one hundred service offerings for both bank and credit union customers, there are few providers better positioned to help merging financial institutions integrate on a single processing platform. As organizations blend their operations, they will be looking to consolidate vendors and systems -- that's Jack Henry's value proposition. I don't expect eye-popping growth or wildly optimistic projections for an addressable market. But I do expect modest capital appreciation, a growing dividend, and peace of mind. That's why I'll be adding shares of Jack Henry to my portfolio.

2 Companies Poised to Profit From Bank of America's Woes

Banks Fail to Wow With Online Banking… Except This One
357%