The dating app that gives women some control still has plenty of growth potential.

Bumble's (BMBL 0.04%) stock price rallied on Aug. 12 after the online dating company posted its second-quarter numbers. Investors seemed to like what they saw in the report. But is the stock worth buying after that post-earnings pop?

Let's examine three compelling reasons to buy Bumble -- and one reason to sell it -- to see if it's a worthy investment.

1. Bumble has robust growth in revenue and users 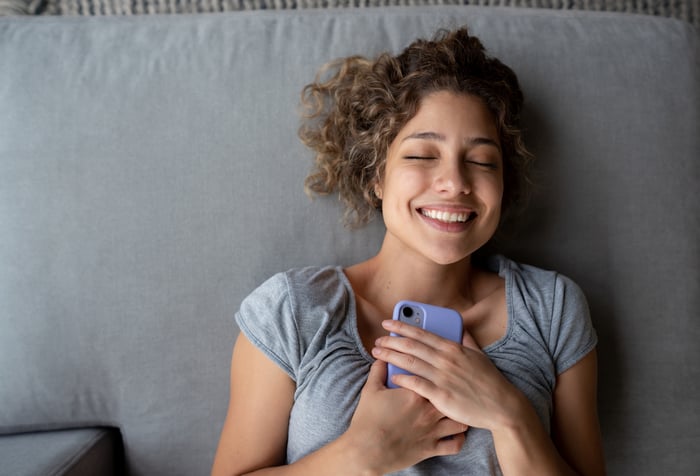 On a combined basis, Bumble and Badoo's paying users increased 20% to 2.9 million. Bumble has traditionally generated higher revenue per paying user than Badoo, but this marks the first quarter it also served more paying users. Bumble's current growth rate suggests it will continue to outpace Badoo's growth and reduce the older app's weight on its top line.

Bumble is much smaller than Match Group (MTCH -1.22%), which owns Tinder, Hinge, and other popular dating apps. But it's also growing faster than Match, which grew its paid users 15% year over year to 15 million in the second quarter.

Bumble boosted its revenue guidance to 29% to 31% growth for the full year, compared to its prior guidance for 24% to 26% growth. Analysts expect Match's revenue to grow 21% this year.

2. Bumble is expanding its high-growth niche

Bumble's robust growth indicates its core app has carved out a high-growth niche by letting women make the first move in initiating online contact with a potential partner.

Between 2017 and 2020, Bumble's market share in the U.S. rose from 10% to 19%, according to Sensor Tower, putting it firmly in second place behind Tinder's 40% share. It also plans to expand its overseas presence in promising markets like India, where its monthly active users rose 60% year over year in the second quarter.

Bumble also continues to expand its female-oriented ecosystem with Bumble BFF for platonic friendships and Bumble Bizz for business connections. Neither of those platforms has been monetized yet, but Wolfe Herd pointed out that 10% of Bumble's MAUs were already using BFF -- which suggests it could eventually expand into a broader social networking platform for friends and family.

Bumble isn't consistently profitable according to generally accepted accounting principles (GAAP) yet, but its adjusted earnings before interest, taxes, depreciation, and amortization, or EBITDA, rose 60% year over year to $51.9 million during the second quarter. Its adjusted EBITDA margin rose from 24.1% to 27.9%.

Bumble's GAAP loss of $0.06 per share in the second quarter missed analysts' expectations by $0.06, but its strong revenue growth and bright outlook seemed to offset that earnings miss.

The one reason to sell Bumble: The delta variant

Bumble's growth rates are impressive and its valuation is reasonable, but it's also a reopening play. The pandemic throttled its growth last year as more people stayed at home, and the delta variant's recent spread across the U.S. and other countries indicates the crisis is far from over.

If you believe the recent resurgence in COVID-19 cases will lead to new lockdown measures -- which would inevitably impact Bumble's core business as well as its recent restaurant experiment -- it might be wiser to stick with pandemic-oriented tech stocks like Zoom Video Communications instead of reopening stocks like Bumble.

Do Bumble's strengths outweigh its weaknesses?

I own shares of Bumble, and I'm willing to buy more shares after its second-quarter earnings report. The delta variant could cause near-term challenges, but Bumble's core business is strong and it still has plenty of ways to expand its ecosystem and global presence.

Bumble is also growing faster than Match, but it's trading at a lower price-to-sales ratio with just a quarter of its market capitalization. Therefore, investors who missed out on Match's massive gains over the past few years should consider starting a position in Bumble right now.

Could Bumble Become the Next Match Group?
351%