The stock market took a hit on Tuesday, although losses for major market averages were limited to less than 1%. The Dow Jones Industrial Average (DJINDICES:^DJI), S&P 500 (SNPINDEX:^GSPC), and Nasdaq Composite (NASDAQINDEX:^IXIC) all came under pressure, with worries about retail sales and the state of the consumer economy weighing on market sentiment.

Warren Buffett still gets a lot of attention, even in his 90s, and the leader of Berkshire Hathaway (NYSE:BRK.A) (NYSE:BRK.B) has plenty of people watching his investment moves. Late Monday, the insurance giant released its latest holdings, and a couple of stocks saw big moves as a result. Below, we'll look more closely at why Kroger (NYSE:KR) saw nice gains while General Motors (NYSE:GM) dropped.

Shares of Kroger were up nearly 5% on Tuesday. That sent the grocery stock to an all-time high.

Buffett already had a sizable stake in Kroger before the latest holdings as of June 30 got announced, with his first purchase of the company coming in the fourth quarter of 2019. However, he has continued to add to his position, with purchases of another 10.7 million shares. Now, the company's 61.8 million shares are worth about $2.8 billion and make up roughly 0.8% of Berkshire's total portfolio of publicly traded stocks. 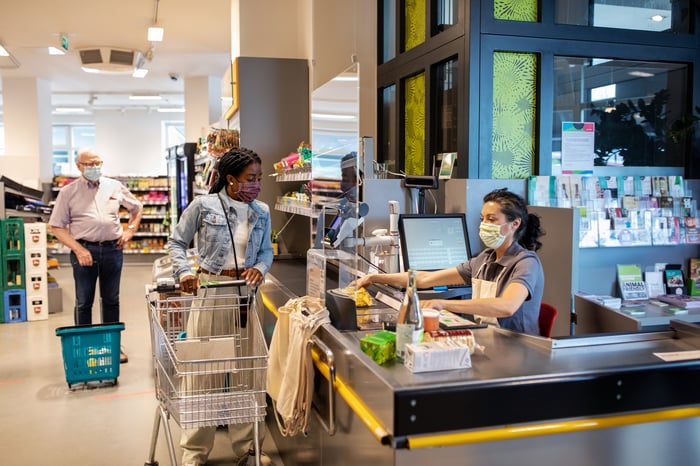 In a rising stock market, Kroger still has some attractive features. Although its valuation isn't quite as cheap as it was in 2019 before the pandemic, it nevertheless trades at a reasonable earnings multiple that's hard to find among most defensive stocks. Moreover, a nearly 2% dividend yield accompanied by consistent increases in quarterly payouts works to the benefit of shareholders as well.

It's unrealistic to expect huge growth from Kroger, but that's not a requirement for a Buffett stock. Indeed, when investors underappreciate the value of a mature company, that's when the Berkshire CEO is most likely to see it as a bargain buy.

Meanwhile, shares of General Motors were down almost 5%. The automaker took a hit from recently reported economic data, but it also saw Buffett continue to sell down his GM stake.

The Census Bureau reported Tuesday morning that retail sales for July fell 1.1%, with new-vehicle spending falling 3.9% compared to the previous month. One big problem is that automakers like GM have had trouble procuring semiconductor chips to work onboard computers, but investors also fear that economic concerns connected to the rise in COVID-19 cases could be leading consumers to pull back on spending.

Berkshire's latest sales of GM stock came long before that, with a 7 million share reduction taking Berkshire's stake in the automaker down to about 60 million shares, worth roughly $3 billion. The move is just the latest in a series of trimmings that Buffett has done recently.

He doesn't often sell stocks, although he has become more active in the aftermath of the pandemic. It's too early to say that the Berkshire leader has lost confidence in General Motors, but the ongoing reduction in his positions still raises questions about whether GM will remain a Buffett stock for the long haul.