Quarterly earnings came in ahead of expectations.

Danimer Scientific (DNMR -3.02%), a young company focused on manufacturing biodegradable plastics, reported second-quarter results that appear significantly better than what analysts had expected. The stock is getting a boost as a result, up as much as 10% in Tuesday morning trading.

Danimer, which went public in late December via a merger with a special purpose acquisition company (SPAC), reported second-quarter earnings of $0.39 per share on revenue of $14.5 million. Only two analysts follow the company, and their consensus estimate was for a $0.07 per-share loss on $11.8 million in sales.

It's not clear whether the headline earnings-per-share number is comparable to the analyst estimate. Danimer also said its adjusted earnings before interest, taxes, depreciation, and amortization (EBITDA) for the quarter was negative $2.7 million, or about $0.02 per share. But either way, it's clear that revenue came in ahead of expectations and at worst, the loss was not as bad as feared. 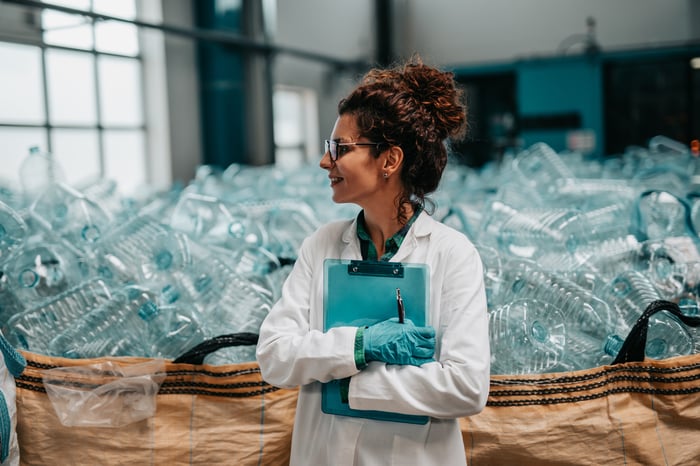 Danimer has been a battleground stock in the brief time it has traded. The shares were up as much as 180% for the year in February before falling back substantially, and are now down 38% year to date. The company has been the target of short-sellers who argue that some of the claims about its plastics don't hold up to scrutiny. It's also faced delays and higher expenses as it attempts to ramp-up production.

Company officials sounded an optimistic tone in the earnings report, saying it expects to accelerate production and generate better economies of scale, in part thanks to its recent acquisition of bioplastics rival Novomer.

As CEO Stephen E. Croskrey said in a statement:

Our competitive advantage is our decade long experience blending products that enable next generation biopolymers to perform to the standards required by leading consumer product firms. This acquisition will not only allow us to further strengthen this core competency, but it will also enable us to increase the expected overall volume of finished product we will be able to deliver, all while significantly lowering our production costs and capital expenditure per pound produced.

Of all the numbers included in the Danimer report, the $14 million revenue figure is the one that really stands out. This is a very young, very small company, valued by the market at more than $1 billion, based on the substantial global need for its product and the hope that it will be a big winner assuming its claims hold up to scrutiny.

With companies like these, a three-month period can only tell you so much about what will eventually become of the business. This is still a work in progress, with a number of different potential outcomes, and investors should limit Danimer to a small part of a well-diversified portfolio.

But there's nothing in this report to cause a bull to question their thesis or use as evidence that the company can't eventually reach its goals. That's good enough to have the stock soaring on Tuesday.

Why Danimer Scientific Stock Fell 17% at the Open Today
376%