Please ensure Javascript is enabled for purposes of website accessibility
Log In Help Join The Motley Fool
Free Article Join Over 1 Million Premium Members And Get More In-Depth Stock Guidance and Research
By Howard Smith – Aug 17, 2021 at 10:53AM

Arcimoto (FUV 7.13%), a manufacturer of three-wheeled electric utility vehicles, released its second-quarter 2021 financial and business update last night, and investors are taking recent gains off the table today. Arcimoto shares were down 19% as of 10:30 a.m. EDT Tuesday.

Arcimoto shares were up about 75% since it reported its first-quarter update in May, going into its latest report last night. Since that time, the company has joined the Russell 2000 and Russell 3000 stock market indexes, initiated production on its "ultimate on-road fun machine" Roadster, revealed a new flatbed offering, and said it plans to develop a new three-wheeled motorcycle.

But when it announced its second-quarter results, investors took profits from the gains realized over the past 90 days. That was likely because it produced fewer vehicles, and sold only half as many as in the first quarter of 2021. 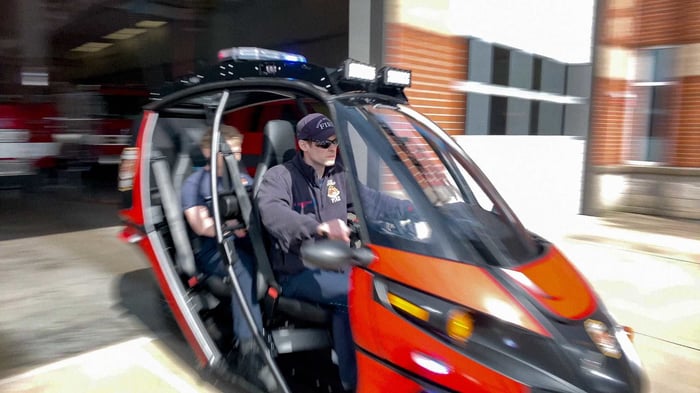 Arcimoto produced 74 vehicles in the most recent quarter, which ended June 30, compared to 84 in the first quarter. As CEO Mark Frohnmayer said, "The second quarter wasn't all roses."

Arcimoto is dealing with supply chain issues that have been affecting many manufacturers. Production delays have led the company to lower 2021 expected production from more than 500 to its new plan for 425 vehicles. Arcimoto's vehicles are designed for last-mile delivery, rapid response, daily commutes, or recreation.

After a sharp rise in the share price in the past three months, however, investors seem to be thinking any delay in the company's ramp-up isn't worth waiting out.

Why Arcimoto Stock Fell 17.1% in February

Why Arcimoto Stock Skyrocketed 63.4% in January

Why Arcimoto Shares Are Down 15% Today